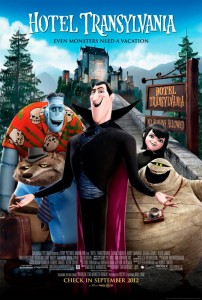 “Hotel Transylvania makes these monsters funny – funnier than they’ve ever been – but the reason these monsters have lasted through the years is that they all have great personal stories,”- Genndy Tartakovsky

Casting the film helped the filmmakers to focus on the movie they were making and striking the right comedic balance and tone, as Tartakovsky explains.  “I think what we’ve done is to take these iconic characters and reshape them.  We had to stay true to the characters, but we wanted a fun movie with monsters, not a scary movie – we brought comedy, not scares.  It’s just that our main characters are monsters,” he says.  “

Welcome to the Hotel Transylvania, Dracula’s lavish five-stake resort, where monsters and their families can live it up, free to be the monsters they are without humans to bother them. On one special weekend, Dracula has invited some of the world’s most famous monsters — Frankenstein and his wife, the Mummy, the Invisible Man, a family of werewolves, and more — to celebrate his daughter Mavis’ 118th birthday. For Drac, catering to these infamous friends is no problem — but his world could come crashing down when a human stumbles on the hotel for the first time and befriends Mavis.

In addition to the warm family story, the director is also bringing Hotel Transylvania a unique, fun look.  Tartakovsky, a 13-time Emmy Award nominee, is well-known in the animation community, hand-picked by George Lucas to create “Star Wars: Clone Wars” after being the creative force behind “Samurai Jack” and “Dexter’s Laboratory” for television. He also conceptualized and storyboarded the final action sequence for Iron Man 2 and provided the stylish and memorable prologue for the film Priest. For Hotel Transylvania, his first feature film, Tartakovsky sought to make an animated feature like no other: in an age when most animated movies strive to get closer and closer to reality, Tartakovsky sought to take advantage of what animation can do by pushing the boundaries.