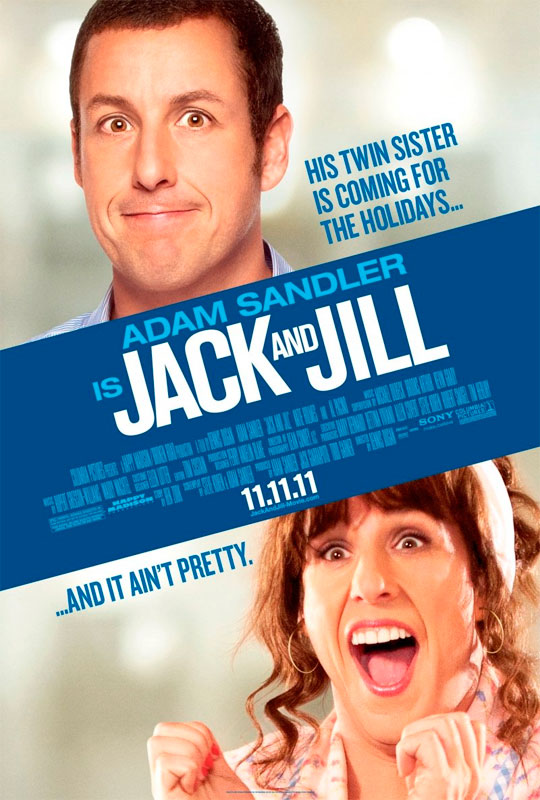 Jack & Jill is about a family man is forced to deal with his twin sister from the Bronx who comes to Los Angeles for a visit, then won’t leave.

Dennis Dugan, who has collaborated with Sandler on most of his films, will serve as director. The film produced under Sandler’s production company Happy Madison, is being shot in Los Angeles, and on the cruise ship Allure of the Seas, before its maiden voyage in December. It will be distributed by Columbia Pictures.

Jack and Jill is a comedy focusing on Jack Sadelstein (Adam Sandler), a successful advertising executive in Los Angeles with a beautiful wife and kids, who dreads one event each year: the Thanksgiving visit of his identical twin sister Jill (also Adam Sandler). Jill’s neediness and passive-aggressiveness is maddening to Jack, turning his normally tranquil life upside down.  Katie Holmes plays Erin, Jack’s wife. Al Pacino is set to play himself hitting on Jill.

Mary Pols of Time Magazine ranked the film #1 on the Top 10 Worst Movies of 2011. TV Guide included the film on its “The Worst of 2011” list.Andrew Barker of Variety said that the film’s “general stupidity, careless direction and reliance on a single-joke premise that was never really funny to begin with are only the most obvious of its problems.” Internet review show Half in the Bag criticized Jack and Jill for recycling gags from Sandler’s previous films, incessant product placement, and laziness in terms of both writing and production quality. They would later call it “the worst thing in the world“. The film won a total of 10 Razzies in 2012, setting a new record and displacing 2000’s Battlefield Earth which had garnered 9 awards.

Despite generally scathing reviews, the film did receive some positive reception. However much of this was seen as a ‘one-off’ or a surprise in comparison to the rest of the film. Critic Armond White of CityArts/New York Press caused a storm of controversy when praising Jack and Jill, having stated that “Adam Sandler’s movies are not ‘dumb fun’; maybe that’s why they’re not in critics favor.” Pacino’s performance was praised, with Rotten Tomatoes calling it an “inexplicably committed performance.”