It’s Christmas Eve in Tinseltown and Sin-Dee (Kitana Kiki Rodriguez) is back on the block. Upon hearing that her pimp boyfriend (James Ransone) hasn’t been faithful during the 28 days she was locked up, the working girl and her best friend, Alexandra (Mya Taylor), embark on a mission to get to the bottom of the scandalous rumor. 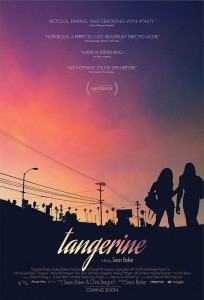 Kerren Karagulian has been in all of director Sean Baker’s films, and the two have a strong working relationship

Coming off of his SXSW 2012 hit Starlet, writer/director Sean Baker was interested in once again making a film that provided a nonjudgmental, level-headed look at individuals who are often marginalized in the broader cultural conversation. Mark Duplass  asked Baker if he had an idea for a new film concept. Baker explained. “I had recently been at the New Zealand Film Festival where I was presenting Starlet, and I was very inspired by the kinds of films I saw.” So when Duplass – a prolific actor, director, writer and producer in the indie sphere – came calling with a request that they collaborate on a project, Baker was prepared with an idea for his subject matter.

The Los Angeles neighborhood where Mya lived is close to the intersection of Santa Monica and Highland, to become the backdrop for the developing story. Explained Baker, “it is notorious for some of its illegal activity, in particular prostitution and drug use. So my co-screenwriter Chris Bergoch and I decided that we wanted to explore that world and, like my other films, we knew there would be an extensive research process. ”

With Duplass on board as a producer, Baker, Bergoch, and Taylor dove into researching the criminal activity in their neighborhood, and they ended up befriending a number of transgender prostitutes. It wasn’t long before the screenwriters began to put a story together – a story that locked into place when Taylor introduced them to her friend Kitana Kiki Rodriguez. The dynamic between the two women was extremely appealing to Baker. “Kiki was a trans mentor and a trans advocate and she was also very familiar with that area. Mya and Kiki had this camaraderie together. There was something about it that I thought could make a perfect duo, I could see the two of them on the screen. And it was at that point that I told them I want to make a film with both of them.”

The premise of Tangerine grew out of the in-depth conversations Baker and Bergoch had with Taylor and Rodriguez. Rodriguez plays Sin-Dee, a trans prostitute who has just been release from a short prison stint; Taylor plays Alexandra, an aspiring singer and Sin-Dee’s best friend. She, too, is a trans prostitute.

A third storyline is introduced early on: that of an Armenian cab driver, Ramzik (Karren Karagulian), whose link to the girls is not immediately known. While Baker and Bergoch were writing, the decision to humanize Ramzik before revealing his secret sexual predilection was a crucial storytelling decision.

One of the most visually striking components of the film is its look, which is grainy yet also highly saturated, creating a sense of tension within the images. Though it may not be apparent upon first glance, Baker and Director of Photography Radium Cheung actually shot the film on iPhones. Baker explained that there were a number of factors that contributed to the decision. “The iPhone 5S had recently come out with its better camera. So we started thinking about how the iPhone could help us. We realized it could be good for shooting with first-time actors because it wouldn’t intimidate them and the extras that we were grabbing off the street. It allowed us to shoot clandestinely. We were able to have a very small footprint. But I wanted to still make this film extremely cinematic, so we shot with anamorphic lenses. They were actually prototypes from a company called Moondog Labs, which provided us with prototype anamorphic adapters for the iPhone. Nobody else had shot like this.”