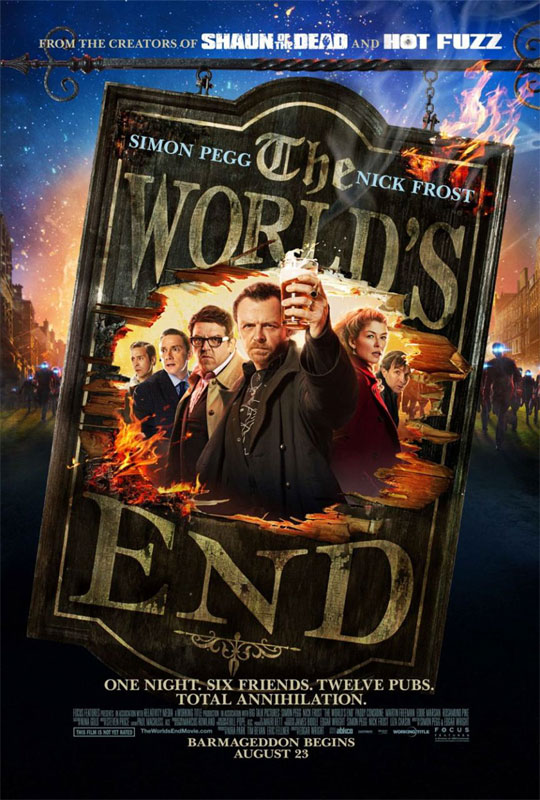 Among other Hertfordshire shooting locations, the unit spent weeks lensing specially created interiors at the famed Elstree Studios, where cinematic touchstones such as the first Star Wars trilogy were filmed.

The tale of The World’s End begins on June 22nd, 1990. In their suburban U.K. town of Newton Haven, five boys in the prime of their teenage youth celebrate the end of school by attempting an epic pub crawl together.

The anticipated demands of the action scenes obliged Pegg to “start training at least seven months early, while I was still filming Star Trek Into Darkness . I wanted Gary to be one of those people who shouldn’t be alive yet somehow look wiry and fit, like certain rock stars we all know; you think, ‘What is this guy’s metabolism made of?’”

For the special effects under visual effects supervisor Frazer Churchill, Wright hewed to the tenet that “the best effects are a combination of physical and digital. Even though what happens in The World’s End becomes insane and surreal, Frazer and our crew ground the effects in a sense of realism. Things were done on-set, and then we would use digital augmentation. This way, the actors could react against something even if they had to not look ‘there’ or don’t touch ‘here.’ Nowadays, digital effects have gotten so good that people don’t have the patience to do practical effects any more. We were really able to use our imagination, but also plan everything out.

The majority of the night shoots on location took place in Letchworth Garden City, in Hertfordshire. With extensive community cooperation, the production filmed both interiors and exteriors in the historically and architecturally significant town – making it the first major movie ever to do so. Grateful to the local residents, Simon Pegg and Nick Frost took a break from filming to preside over Letchworth’s annual holiday lighting ceremony. A second storied Hertfordshire town, Welwyn Garden City, was also the site of location filming.

Among other Hertfordshire shooting locations, the unit spent weeks lensing specially created interiors at the famed Elstree Studios, where cinematic touchstones such as the first Star Wars trilogy were filmed.