Gerard Butler reveals a whole new side to one of his signature roles–Secret Service agent Mike Banning–in this explosive, rip-roaring thriller in which the fate of the nation rests on the very man accused of attempting to assassinate the President of the United States. 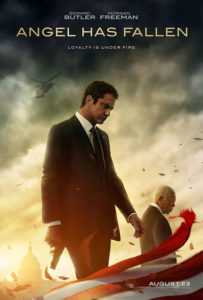 Key location include the vast Vertigo Business Tower in Sofia, Bulgaria—a stunning work of modern architecture, which resembles a giant polished diamond—and Guy’s Hospital in London which stands in for the D.C. hospital where President Trumbull and Banning are airlifted after the drone attack.

Knowing he wanted both more grit and more emotional depth, Butler searched for a director who could thread that needle. He found what he was searching for in Ric Roman Waugh, a former stunt performer seen in a long roster of 80s action classics, who came to the fore as a director with his taut, tense trilogy of prison thrillers: Felon, Snitch and Shot-Caller, Waugh had also directed That Which I Love Destroys Me, a documentary about Iraq war veterans dealing with traumatic stress disorders and the psychic wounds of war, which sealed the deal.

The first time Butler met with Waugh, the ideas started flowing freely and that process did not stop until the final print was locked.

Waugh jumped right away at the idea of exploring Mike Banning not just in jeopardy but in a chaotic state of mind. He knew from making That Which I Love Destroys Me that a man like Banning would, like so many real-life warriors in the military and law enforcement worlds, have to pay the piper for the mental, physical and spiritual toll of his work.

Early on, Waugh met with a man who is in many ways the real-life version of Mike Banning: the film’s security advisor, Mickey Nelson, a 28-year veteran of the Secret Service who served under four presidents, most recently President Obama. Nelson confirmed that Secret Service agents wrestle the intoxicating effects of adrenaline. “Mickey talked openly about the rush you get from protecting the most important person in the country—and he also talked about getting to a point where you crave that intense vigilance all the time,” says Waugh. “That’s exactly what Mike is thinking about as he faces a desk job. It brings up this huge question for him: do I keep trying to be the person I was in my youth or do I find a way to embrace who I’ve become? It’s something a lot of people go through in all walks of life.”

He was Speaker of the House in Olympus Has Fallen and Vice President in London Has Fallen, but now, Morgan Freeman’s President Trumbull has taken on the mantle—and all the hazards—of being Commander-in-Chief. Nearly assassinated and told his most trusted Secret Service agent is the prime suspect in the deadly attack, Trumbull faces a dilemma that could endanger not only his cherished friendship with Mike Banning but the future of the world.

For Freeman, it was fun to climb the ladder to the presidency. “In this one, I’m elevated again. I’m the president, but that means I am now directly in harm’s way,” he muses. Freeman looked forward to finally having one-on-one scenes with Butler. “This is actually the first time Gerry and I have really worked together like this,” Freeman notes. “In the other films, I’ve been in a safe bunker somewhere, or in DC while he was in London. Finally, we were able to work mano a mano, which was a true pleasure for me.”

Creating a sometimes comical, but always compelling, contrast with Butler’s Mike Banning is the casting of Nick Nolte, known for his portraits of characters with tough hides but convoluted innards. Here, he brings a sense of frayed dignity to a man not quite sure if he’s ready for redemption. Nolte came aboard because he loved the idea of putting such a damaged, complicated, razor-tongued character—one who reflects a reality for some veterans—in the middle of the hardcore action. “I was interested in the challenge of this role,” Nolte explains, “and I was also drawn to working with Gerard. That turned out to be a bigger treat than I even imagined it would be because he really is at the top of his game right now.”

To lock Mike Banning into a chaotic world of ceaseless jeopardy, Waugh turned to a crack behind-the-scenes team. The bottom line for all could be summed up in one word: groundedness, “I like to capture how people really move in a fight or a chase, what it really sounds like and the visceral feel of it,” explains Waugh. “The idea was to immerse people completely into Banning’s POV of every moment.”

With the shoot taking place largely in the UK and Bulgaria, De Rozario got creative for many of his sets. For example, he used bunkers at the former U.S. Air Force base at Upper Heyford in Oxfordshire to create Salient Security’s training facility where Banning goes through a terrifying simulation in the opening moments of the film.