Inspired by true events, HUSTLERS is a comedy-drama that follows a crew of savvy strip club employees who band together to turn the tables on their Wall Street clients. At the start of 2007, Destiny (Constance Wu) is a young woman struggling to make ends meet, to provide for herself and her grandma. But it’s not easy: the managers, DJs, and bartenders expect a cut– one way or another – leaving Destiny with a meager payday after a long night of stripping. 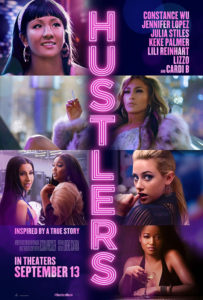 Producer Jessica Elbaum, a principal at Gloria Sanchez Productions, which optioned Pressler’s New York magazine story, observes, “I found these women’s journeys to be fascinating. It’s a slice of life and a cautionary tale about what happens when your ambition is bigger than the reality of your situation.”

Jennifer Lopez, who portrays Ramona and serves as a producer on the film, says she was drawn to the fact that HUSTLERS is about “greed, power, and the American Dream and what a certain group of women, who work in a field where they are discounted, will do to achieve it. It’s an amorality story about the slippery slope of the hustle. These women did not invent the game; they just tried to level the playing field. It’s about right, wrong, and how far you’ll go to hustle for your dreams.”

According to producer Elaine Goldsmith-Thomas, the filmmakers sought an inclusive cast, which “lends itself authentically to the world, while also being a lot of fun.” All the actors, like their on-screen counterparts, bonded instantly, and understood but didn’t judge their characters. “They really inhabited them,” Goldsmith-Thomas continues. “They understood who these women were and what it meant to be an exotic dancer. HUSTLERS is a celebration of sisterhood, and what a tight-knit family of women have to do for a fighting chance.”

Constance Wu was especially intrigued with the relationship between her character, Destiny, and Jennifer Lopez’s Ramona, and likens it to a pairing in one of her favorite novels. “What Ramona is for Destiny reminds me of this quote from Patricia Highsmith’s The Talented Mr. Ripley: ‘The thing with Dickie… it’s like the sun shines on you, and it’s glorious. And then he forgets you and it’s very, very cold…When you have his attention, you feel like you’re the only person in the world, that’s why everybody loves him so much.’ Destiny’s dream come true is for Ramona to love her.” Wu did extensive research for the role, the most important of which, she notes, was “becoming close with different women in the profession and getting to know them as people.”

Like Wu, Lopez got to know several dancers and visited strip clubs, where she observed their routines. “I then met with them backstage and listened to what it was like to have a career as a dancer,” Lopez recalls. “I soaked up the atmosphere and wanted to learn how to do things authentically, including pole dancing. I think it would surprise people – although it shouldn’t – that most of these women are just trying to get by. Their struggles are 100 percent relatable. They want to take care of themselves and their families, and we wanted to make sure we brought that all to life.”

Trace Lysette portrays the dancer, Tracey. Lysette, who became one of the first trans actors to appear on a prime-time television series in a speaking role, with her work on Transparent, actually made a living at a strip club. “I danced at [the popular New York strip club] Scores for over eight years,” she explains. “I remember when the money was flowing – and when it stopped coming after the 2008 financial crisis.”

There were many challenges awaiting the actors who portray the exotic dancers, but certainly learning their way around a strip club pole was at the top of the list. “My muscles have never been so sore as when I trained on that pole,” Wu succinctly describes her experiences while training to learn the precise and specific moves. Even Lopez, a longtime skilled dancer who works out every day, says it was one of the most difficult things she’s ever done. “I trained for almost six months in preparation for this film,” she relates. “I had a portable strip pole in every city I visited, so I never missed a session. I was using a group of muscles I hadn’t ever tested before, so I walked away with fresh bruises after every session. My shoulders and back are still recovering!”

Wu, Lopez and all the actors required to learn pole dancing, credit pole choreographer Johanna Sapakie with making it all possible for them. “Johanna is really talented,” says Lopez, “and we couldn’t have done it without her expert guidance.” A former Cirque de Soleil performer and acrobatic dancer, Sapakie says it was important that each actor be able to feel what it’s like to be dancing on a pole. “It’s their environment, and part of their characters’ development,” she says.

Research was a key tool in shaping Muskey’s designs. “I looked at the social media accounts of some strippers, and was so impressed,” veteran production designer Jane Musky (Maid in Manhattan) recalls. “There were images of their knees bleeding; their work is very demanding and strenuous, but they make it look so beautiful.” While realism was the watchword, “We did make some changes,” Muskey says. “Usually, a club’s dressing rooms lockers store all the dancers’ belongings. But we wanted to see them prepare to go on stage, with all their makeup, garments, and grooming tools filling up the frame.”

The scenes set in the gentlemen’s club were captured at an actual New York strip club, Show Palace, which Muskey and her team made their own. “It was important that we create a look, so we transformed that venue,” she explains. “We made it more visually dynamic, with reflections, color, and neon – giving it a little more life.” The club’s owner was so pleased with the changes, that he retained them after filming had wrapped at the site.

Costume designer Mitchell Travers also got a kick out of designing for some of the notables from the world of music, who play supporting roles. “I really loved working in a different light with globally recognized figures, like Cardi B and Lizzo,” he offers. “I would think about details like what goes in their purses, how big are the purses, and do they take the subway or travel by taxi?”