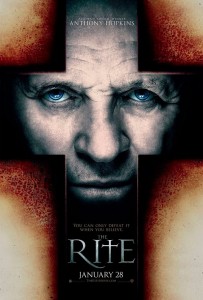 The Rite is based on Matt Baglio‘s nonfiction book The Rite: The Making of a Modern Exorcist, directed by Mikael Hafstrom and starring Anthony Hopkins, Colin O’Donoghue, Alice Braga, Ciaran Hinds, and Toby Jones

While in Rome, he meets an unorthodox priest, Father Lucas (Anthony Hopkins), who introduces him to the darker side of his faith.

Directed by Mikael Håfström (“1408”), “The Rite” is a supernatural thriller that uncovers the devil’s reach to even one of the holiest places on Earth. Contrafilms’ Beau Flynn and Tripp Vinson (“The Exorcism of Emily Rose”) are producing the film. The screenplay was penned by Michael Petroni (“The Chronicles of Narnia: The Voyage of the Dawn Treader”), inspired by the book by Matt Baglio. The book focuses on the real events of the author, who participated in a priest exorcist seminar in the Vatican to accompany one month. His experiences, which are based on real incidents, are incorporated into the book. Christy Fletcher and Emma Parry are co-producing. Richard Brener, Merideth Finn and Robert Bernacchi serve as executive producers.

An Oscar® winner for his iconic portrayal of Dr. Hannibal Lecter in “The Silence of the Lambs,” Anthony Hopkins’ impressive career includes “The Remains of the Day” and this year’s “The Wolfman,” as well as the comics-based film “Thor.” Making his feature film debut, O’Donoghue stars as Michael Kovak, the disillusioned American seminary student. Alice Braga plays the role of Angeline, a journalist in Rome doing research on exorcisms. Braga will next be seen  in “Predators.” Her additional credits include “I Am Legend” and “City of God.” Ciarán Hinds portrays Father Xavier. Known for his role as Gaius Julius Caesar in HBO’s “Rome,” Hinds will soon be seen in the upcoming “Harry Potter and the Deathly Hallows” films. Toby Jones plays the role of Father Matthew. Jones has appeared in such films as “Frost/Nixon,” “Harry Potter and the Chamber of Secrets” and “The Painted Veil” and will be seen in “Captain America: The First Avenger.” Veteran actor Rutger Hauer takes on the role of Michael’s father, Istvan Kovak. Hauer’s career includes roles in “Blade Runner,” “The Hitcher,” “Sin City” and “Batman Begins.”

Håfström previously directed the John Cusack thriller “1408,” and “Derailed,” starring Clive Owen and Jennifer Aniston. His most recent film, “Shanghai,” also starring John Cusack, will be in theaters later. His film “Evil,” which he wrote and directed, was nominated for Best Foreign Language Film at the 2004 Academy Awards® and won three Swedish Guldbagge Awards, including Best Film.Håfström began with the working on the exorcism thriller, which is based on a novel from Matt Baglio in February 2010.

The film is based on a true story, he casted in March for the lead roles Anthony Hopkins and Colin O’Donoghue. The film shot in the Contrafilm Studios and is produced by Beau Flynn and Tripp Vinson. On the director’s chair is placed the Swedish filmmaker Mikael Håfström and the screenplay for the production is written by Michael Petroni.