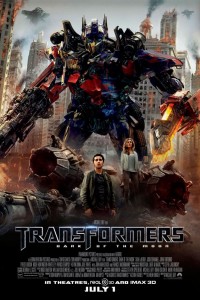 In Transformers: Dark of the Moon,the Autobots learn of a Cybertronian spacecraft hidden on the Moon, and race against the Decepticons to reach it and learn its secrets, which could turn the tide in the Transformers final battle

Shia LaBeouf, Josh Duhamel, Tyrese Gibson, John Turturro and Ramón Rodríguez are set to reprise their starring roles, with Peter Cullen returning as the voice of Optimus Prime. Ehren Kruger, who collaborated in the writing of the second film, was said to be again involved in the writing. Despite having initially been confirmed for the film, and with the film already into principal photography, it was announced that Megan Fox would not be reprising her role from the previous two films.

With Fox’s character Mikaela being dropped, Sam was assigned a new love interest, who will be played by English model Rosie Huntington-Whiteley. Also, Roberto Orci and Alex Kurtzman, having written the first two films, will not return for the third installment in the series, which Orci had earlier somewhat anticipated, fearing the duo would “risk getting stale”. Bay has stated this would be the last installment in the series.

The Autobots learn of a Cybertronian spacecraft on the Moon and must race against the Decepticons to find it and learn its secrets, which could turn the tide in the Transformers’ final battle.

As of March 19, 2010, the script was said to be finished, and pre-shoots began on April 7, 2010 in Indiana, which will portray Ukraine and Los Angeles. Filming began on May 18. The first six weeks took place in Los Angeles, locations included Sherman Oaks, Fourth Avenue and 5. Main. The next four weeks were spent in Chicago. Locations filmed in Chicago included LaSalle Street, Michigan Avenue, Bacino’s of Lincoln Park at 2204 North Lincoln Avenue and around the “Sears Tower”. The scenes set in Michigan Ave featured a substantial amount of pyrotechnics and stunt work. Filming in Detroit was planned to take place August but the Chicago shoot was extended until 1 September.

In late September the production moved to Florida, just before the launch of Space Shuttle mission STS-133. While filming in Washington the crew shot on the National Mall, Michael Bay stated that there would be a car race on the location. Two further locations announced were the Milwaukee Art Museum and an old factory location of Tower Automotive, currently under redevelopment for mixed use as well as the City of Milwaukee equipment yard. Filming was scheduled to take place there after work was done in Chicago.

On September 23, filming was done at the former city hall in Detroit, MI. On October 16, work was done at the Johnson Space Center in Texas with intent to shoot a scene set in the late 1960s utilizing extras with period fashion and hairstyles. Other planned filming locations included Africa, Moscow, and China. The film is being shot entirely in 3D using the Sony Pace 3D Camera system used for Resident Evil: Afterlife. Filming was officially completed on November 9, 2010. On November 26, it was announced the film had entered post-production.

According to representatives for Paramount, Megan Fox will not appear in the film because Bay ultimately chose not to renew Fox’s role, although representatives for the actress said that it was her decision to leave the film franchise. With Fox not reprising her role, Rosie Huntington-Whiteley was chosen to play Sam’s new love interest. Ken Jeong will have an undisclosed role in the film, and Kym Whitley has declared being involved in the shoots. A casting call for extras for the film has been said to call for actors to play Iranian military men for scenes to be filmed in Los Angeles, and reportedly the Ukrainian army will be involved as well. Glee’s Iqbal Theba confirmed on Twitter that he will have a cameo appearance as the secretary-general of the United Nations.