Hoodwinked Too! Hood vs. Evil is a 3D animation movie, sequel to 2006’s Hoodwinked!, directed by Mike Disa. The film was written by Cory Edwards, Todd Edwards and Tony Leech, who also wrote the previous Hoodwinked! film. 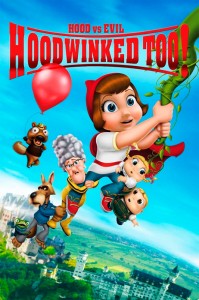 Hoodwinked Too! Hood vs. Evil tells the tale of Red Riding Hood who is training in the group of Sister Hoods, when she and the Wolf are called to examine the sudden mysterious disappearance of Hansel and Gretel.

From the team that brought you “Hoodwinked,” the comedic portrayal of the fairy tale Red Riding Hood, comes the all-new animated family comedy “Hoodwinked Too! Hood vs. Evil” in 3D. The sequel finds our heroine, Red (Hayden Panettiere), training with a mysterious covert group called the Sisters of the Hood. But Red is forced to cut her training short when she gets an urgent call from Nicky Flippers (David Ogden Stiers), who returns as head of the super-secret Happily Ever After Agency, aka the HEA. A wicked witch (Joan Cusack) has abducted two innocent children, Hansel (Bill Hader) and Gretel (Amy Poehler), and Nicky needs Red for the search-and-rescue mission. Thankfully, Granny (Glenn Close) and the rest of the “Hoodwinked” gang—including the ever-clueless Wolf (Patrick Warburton) and his over-caffeinated little partner, Twitchy (Cory Edwards), join Red to solve the forest’s latest caper.

Hoodwinked 2 went under production at Blue Yonder Films, the makers of Doogal and the first Hoodwinked movie, for one-and-a-half years. Blue Yonder had a much higher budget to produce their third CG feature film on relative to the budgets of their last two films: $25,000,000. This gave the animators more money to experiment in further developing elements of computer animation that they had in the original film. The characters’s hair and facial features are more realistic. The backgrounds and sets of the film are also more further developed in look and in texture.

After painstaking production that started in June 2008, Hoodwinked 2 was finished and ready for release in January 2010. Unfortunately, a coorporate shake-up with the film’s distributor, The Weinstein Company delayed the film’s release. However, this information was not released until September 2010, until which director, Mike Disa had been stating that the film’s delay was due to failure in the graphics software at Blue Yonder and that the company was preforming some “animation tweeks.” It wasn’t until February 2011, that further information was distributed about Hoodwinked 2. It came with a theatrical poster, an official trailer, and a release date. It was also announced that Anne Hathaway would not be reprising her role as Red from the original film, as well as Jim Belushi who would not reprise his role as Kirk the woodsman.