Kung Fu Panda 2, is an animated film and the sequel to the 2008 film, Kung Fu Panda. It is set to be in 3D, will be directed by Jennifer Yuh Nelson, and executive produced by Guillermo del Toro (Pan’s Labyrinth, Blade II) with most of the original cast returning, along with some new characters.The film was originally going to be named Kung Fu Panda 2: Pandamonium. 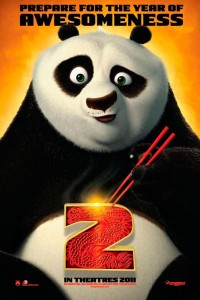 In Kung Fu Panda 2, Po joins forces with a group of new kung-fu masters to take on an old enemy with a deadly new weapon.

In KUNG FU PANDA 2, Po is now living his dream as The Dragon Warrior, protecting the Valley of Peace alongside his friends and fellow kung fu masters, The Furious Five.

But Po’s new life of awesomeness is threatened by the emergence of a formidable villain, who plans to use a secret, unstoppable weapon to conquer China and destroy kung fu.  He must look to his past and uncover the secrets of his mysterious origins; only then will Po be able to unlock the strength he needs to succeed.

THQ will release a video game based on the movie for the PlayStation 3, Xbox 360, Wii, and DS. A 3DS version will also be made.