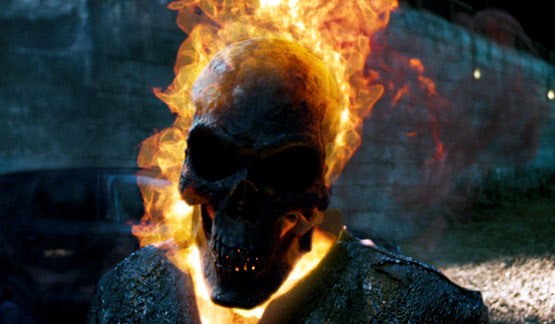 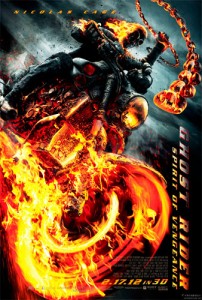 In July 2010 Nicolas Cage revealed shooting was to start in November.In an interview with Superhero Hype!, Eva Mendes revealed that she would not be back as Roxanne for the sequel.

The film was directed by Mark Neveldine and Brian Taylor, from a screenplay written by David S. Goyer, Scott Gimple and Seth Hoffman. Ghost Rider: Spirit of Vengeance is scheduled to be released in theaters on February 17, 2012.

In February 9, 2007, Marvel producer Avi Arad announced the development of Ghost Rider 2 at a press event. Peter Fonda has also expressed a desire to return as Mephistopheles.In early December, 2007, Nicolas Cage also has expressed interest to return in the lead role as Ghost Rider.

Shortly after, in another interview he went on further to mention that he would enjoy seeing a darker story, adding, “He’s not eating jelly beans anymore; he’s getting drunk“. He suggested that the film could do with newly created villains. It is also rumored that the sequel would feature Danny Ketch, another Marvel character who took up the Ghost Rider mantle in the comics.

In a September 2008 interview, Nicolas Cage informed IGN that Columbia have taken meetings to start a sequel. Cage noted conversations about the story, where Ghost Rider may end up in Europe on behalf of the church, having story elements “very much in the zeitgeist, like Da Vinci Code.” In February 2009, an online source stated Columbia Pictures had greenlit a sequel to Ghost Rider.

Nicolas Cage will reprise the lead role, whilst the studio are in search of writers. On September 23, 2009, it was reported that David S. Goyer signed on to write the script for the sequel. Goyer spoke to MTV about the sequel, stating that the story will pick up eight years after the events of the first film and that he hopes to start filming by 2010.

The sequel is titled Ghost Rider: Spirit of Vengeance and will be produced by Mike De Luca and will screen with a PG-13 rating. On July 14, 2010 it was confirmed that Nicolas Cage would return, and Mark Neveldine and Brian Taylor were announced to direct the film, with editor Brian Berdan and cinematographer Brandon Trost reuniting with the directors from the Crank films. Idris Elba also stars in the movie.