No Strings Attached, a romantic comedy film directed by Ivan Reitman and starring Natalie Portman and Ashton Kutcher, tells the tale of two people, one of whom is a doctor, trying to have an emotionally free sexual relationship, only to have a revelation of wanting more. The film is being distributed by Paramount Pictures (the film was originally planned to be released through DreamWorks, before that studio severed its ties with Paramount, who retained the rights to this title). 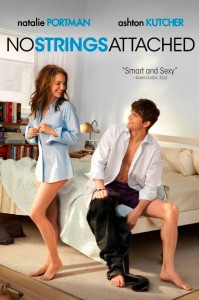 In No Strings Attached, Emma (Natalie Portman) and Adam (Ashton Kutcher) are life-long friends who almost ruin everything by having sex one morning.

When the notion of exploring an of-the-moment, R-rated story that turns the romantic comedy formula on its head landed on Ivan Reitman’s desk, it didn’t take long for the Oscar®-nominated veteran filmmaker to see the cinematic potential in the premise. Reitman says, “I had been working with [screenwriter] Elizabeth Meriwether for about three years, and every evolution of the script gave me something that I really responded to.  I felt, ‘Here’s a story about characters, about people dealing with a very contemporary dilemma.’  Interesting people, very funny people, speaking frankly about love and sex.  And I just fell in love with it.”

Elizabeth Meriwether explains, “I was really into the idea of a love story that started with a kiss instead of ending with one.  That’s what happens in real life sometimes and as someone who loves romantic comedies, I wanted to write one that felt modern.”

“I think the compelling idea here is the concept that contemporary young adults have a much easier time having immediate sex with a partner than having a romantic relationship—a true emotional involvement with someone,” continues Ivan Reitman.  “That’s what interested me.  A little over 20 years ago, ‘When Harry Met Sally’ asked the question whether a man and a woman could be friends without sex getting in the way.  Frankly, I think the question today is, ‘Is it possible for a man and woman to have a purely sexual relationship without emotions getting in the way?’”

The premise of the film felt like an opportunity to explore an idea that (on paper, at least) seems like a logical and perhaps even an ideal arrangement.  The screenwriter even confesses, “This movie is a bit of wish fulfillment for me—the idea that you could sit down and agree that you’re only going to have a physical relationship and if anything else develops, you can abandon ship.”

Lead female character Emma doesn’t really want anything to get in her way, especially not romance.  She is not a relationship girl, and she avoids them like the plague.  As a doctor in-residence, she goes nonstop, often working 80 hour weeks with back-to-back shifts.  She values honesty and efficiency, and she also likes to have sex.  So, the sex-on-demand arrangement is the perfect answer.  Per the screenwriter:  “Emma is not a girly girl and wants to approach life very logically.  She just wants to have fun and doesn’t want to put any pressure on a relationship, because that’s when people can turn into ‘weird versions of themselves.’”

Leading male Adam is a man who has always had an easy time with women and adopts a carefree approach to life.  The son of an ex-television star a bit past his prime, Adam has an ease with women and is no stranger to hooking up.  After his latest relationship with girlfriend Vanessa breaks up, he is confounded to find her hanging around, but now with a new boyfriend at her side.  Meriwether continues, “After Adam learns that his father is dating his ex-girlfriend, he realizes that maybe he has been too nice and too open.  He begins to see emotional availability as a dangerous idea.  At this point he just wants to shut the door and mess around.”