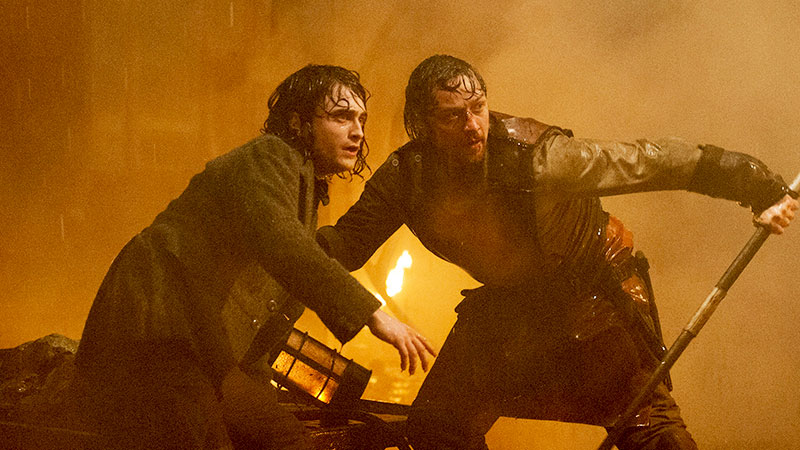 Daniel Radcliffe and James McAvoy star in Victor Frankenstein, a dynamic and thrilling twist on a legendary tale. Radical scientist Victor Frankenstein (James McAvoy) and his equally brilliant protégé Igor Strausman (Daniel Radcliffe) share a noble vision of aiding humanity through their groundbreaking research into immortality. But Victor’s experiments go too far, and his obsession has horrifying consequences. 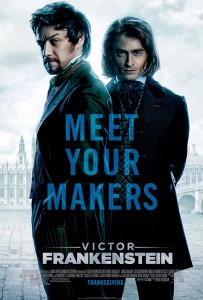 The final version of the monster aptly named Prometheus, was embodied by 6’ 10”actor Guillaume Delaunay, who donned a full prosthetic suit designed by Rob Mayor of Millennium FX, one of Europe’s leading suppliers of special makeup effects.

Victor Frankenstein is a “Frankenstein” movie unlike any other. While inspired by Mary Shelley’s classic novel and the countless interpretations of that story, screenwriter Max Landis’ “regeneration” focuses on the relationship between Victor and his best friend and assistant Igor. In fact, it’s the first story to be told largely from Igor’s perspective. “It’s a love story between these two mean, really,” notes director Paul McGuigan.

McGuigan was especially drawn to Landis’ decision to tell the story through Igor’s eyes. That notion points to a key misperception about the character and his role in Frankenstein lore.

Igor was not a character in Mary Shelley’s book, nor did he appear in most of the subsequent film interpretations. Actor Dwight Frye’s hunchbacked lab assistant in James Whale’s “Frankenstein” (1931) is the main source for the “Igor” of public imagination, though the character he played was actually named Fritz. Most moviegoers know the character through Marty Feldman’s performance in Mel Brooks’ beloved comedy “Young Frankenstein,” though Feldman’s character insists on being called “Eye-gore.”

“Every time Daniel and I had a scene together, we’d ask each other, ‘How physical and dangerous-looking can we make this? Come on, man!,’” says McAvoy. “We are similar in energy levels and physical ability, so we just kind of went at each other, 12 hours each day. Adds Radcliffe: “James is a bold actor and really hits the ground running in an exciting way. That enabled us to make some interesting choices together.”

Igor’s only other friend is Lorelei, a beautiful trapeze artist with whom he had formed a close bond at the circus. It is Lorelei’s fall from the trapeze and Igor’s treatment of her severe injuries that so impresses Victor. Former “Downton Abbey” star Jessica Brown Findlay portrays Lorelei, who despite her beauty, doesn’t fit into the world of the circus and has, notes Findlay, “found a real friend in Igor.”

Another thorn in Victor’s side is Inspector Turpin from Scotland Yard, who is investigating Victor’s morally questionable if not illegal activities. Andrew Scott, best known for his role as the malevolent Moriarty takes on the role, which is a counterpoint to Victor, in that Turpin is a man of faith, and Victor is a man of science.

If there’s true malice in Victor Frankenstein, it’s personified by the character of Finnegan, a wealthy medical student and classmate of Victor’s at the Royal College of Medicine.   Finnegan, portrayed by Freddie Fox, funds Victor’s experiments for his own nefarious purposes.

Filming on Victor Frankenstein took place across 60 days in the United Kingdom. During production, the UK experienced some of its worst storms on record, which made some exterior night shooting extremely challenging for the cast and crew.

The production made creative use of the storms for one of the film’s iconic scenes, the creation of the monster, and for its most impressive set: the interior of the castle and laboratory, where Victor brings his “experiment” to life.

The 60-foot-high cylindrical set, which had an open roof, was built over a four month period at Longcross Studios, Surrey. The exterior scenes were shot at Dunnottar castle, a spectacular, crumbling fortress on a cliff top overlooking the sea, in Aberdeenshire, Scotland.

As filming progressed, the set was steadily destroyed by explosions, flames and water, which dramatically poured through it night after night. This, and all the sets, were created by production designer Eve Stewart whom Daniel Radcliffe says isnothing less than “a force of nature and brilliant at what she does. Her work always has the ‘wow factor,’ as in, ‘god, this set is huge and really impressive!’