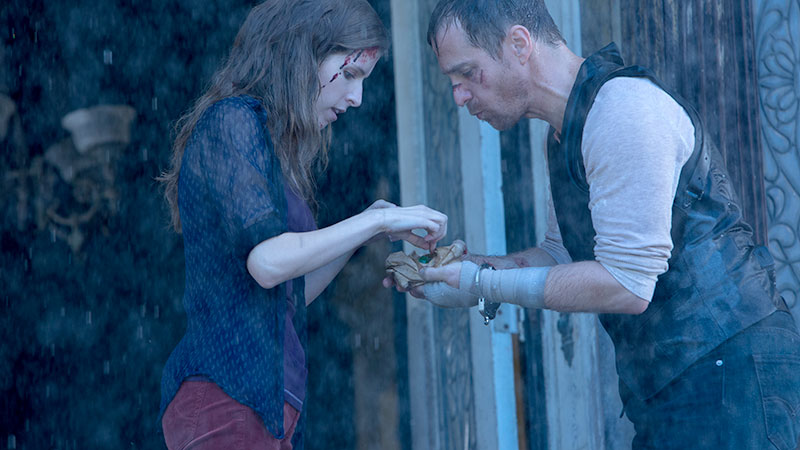 Hyperactive at the best of times, Martha (Anna Kendrick; Pitch Perfect) has gone full-on manic since her latest breakup. She babbles, parties like a monster, cooks everything in sight — and is looking to do something terrible when she meets Francis (Sam Rockwell). To anyone else, Francis’s approach would come across as creepy, but Martha can’t help but be intrigued. They seem a perfect match: she’s bananas, he’s bananas… except he’s a deadly sort of bananas. He’s a professional assassin. 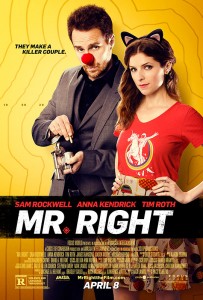 Several years before writer Max Landis’ mastery of offbeat storytelling became evident in American Ultra, Victor Frankenstein and the $122 million-grossing superhero hit Chronicle, he dreamed up an outrageous contribution to the rom-com canon in Mr. Right. When the dancing hitman high concept proved too challenging for mainstream Hollywood tastemakers, Circle of Confusion producers Rick Jacobs and Stephen Emery, who also manage Landis, decided to produce the script themselves. “For all its fun and dynamics, Max’s story didn’t immediately catch the eyes of the studios, so that became an opportunity where Stephen and I decided to put the movie together organically,” Jacobs says.

After Cabezas began casting the leads, Amasia Entertainment principals Bradley Gallo and Michael A. Helfant came on board to finance the project. “We’d been tracking Paco, so he seemed perfect for the material,” says Gallo. “But the movie really came to life in our mind when we were able to picture Sam and Anna as Francis and Martha.”

Sam Rockwell is that rare Hollywood star who’s equally adept in somber dramas as he is playing quirky characters in such black-humored action fare.  Rockwell immediately responded to Mr. Right ‘s subversive sense of humor. “I said ‘yes’ right away because Max wrote a really fun script that reminded me of movies like Grosse Point Blank in the way it mixed action and romantic comedy,” he says. Landis envisioned Rockwell in the title role when he wrote Mr. Right, according to Jacobs.

Like her co-star Rockwell, Anna Kendrick combines dramatic chops with the natural wit. When she read the Mr. Right script, Kendrick savored the chance to go a little wild. “The most exciting thing for me was the way Max wrote Martha as someone who’s always been a little psychotic,” Kendrick says. Kendrick also sparked to Mr. Right because she knew Rockwell would be playing the title role.

Director Cabezas sealed the deal with Kendrick after they met in New York and bonded over a their shared vision of a bold, unpredictable heroine. “Paco showed me a lot of pre-vis stuff on his computer,” she recalls. Producer Jacobs says “Often times with movies in this genre, you see the female lead running scared once the gunfire starts. We needed to find an actress who had that America’s sweetheart girl next door quality, but underneath all of that, in Mr. Right, the gunfire kind of turns Martha on. Anna knew how to pull off that turn.”

British actor Tim Roth, celebrated for his on-screen intensity in Quentin Tarantino’s Hateful Eight, brings his gift of menace to Mr. Right in the person of Francis’ hyper-violent mentor Hopper. “Tim comes from that generation of great actors like Gary Oldman, John Malkovich and John Turturro,” Rockwell says. “I’ve seen him in everything starting he’s done”

Shotgun Steve portrayed by Grammy®-winning rapper/actor/filmmaker RZA. Getting into his Mr. Right character, RZA deliberately softened his fierce public persona. “I wanted the chance to play around because my last couple of films I’ve played stern, straight characters. I’m usually the guy with the beard and the sideburns. But Shotgun Steve, he’s just a fun guy. I never really shaved my face for a movie, but Paco thought it would be cool if we took away some of this character’s aggressive look and then let him grow his bravado. The first time I looked at the mirror, I laughed at myself, and took a picture sent it to my wife, and she thought I looked like an old Motown singer, so now my agent is putting me up for those kinds of gigs. But I don’t normally shave my face off.”

The Mr. Right team considered shooting in Puerto Rico, Colombia and Argentina before deciding to film the entire project in New Orleans. “We wanted to show a side of New Orleans that we haven’t seen before,” says producer Jacobs. Filming Mr. Right in 25 days during the fall of 2014, Cabezas and his crew did just that by steering clear of typical tourist haunts. Instead, Francis and Martha’s pivotal falling-in-love montage takes place in the only-in-New Orleans attraction known as Storyland. ”

Kendrick had never visited Storyland before. “I couldn’t believe no one has ever shot there before,” she marvels. “Even though we don’t comment on it in the dialogue, Storyland is the perfect setting for the madness of Francis and Martha in that they’re walking through this really strange situation, but to them it feels totally normal.”

Production designer Mara LePere-Schloop drew on New Orleans’ rich architectural legacy to transform the historic jockey club, Luling Mansion, into the hyper-masculine headquarters for Richard Cartigan and his gang “The hideaway was an important place where we could add texture and historic elements of the mafia and gambling as a subtle nod to this bygone era,” she says LePere-Schloop, who spent two weeks with her colleagues hand-painting and aging the interiors.

To create Vietnam in Louisiana, LePere-Schloop added lanterns, market stalls, vendors, tuk tuk, vehicles, scooters and bicycles to the location. “It was fun to create a totally different place to book-end this romance and keep the story within in this world that we developed.“