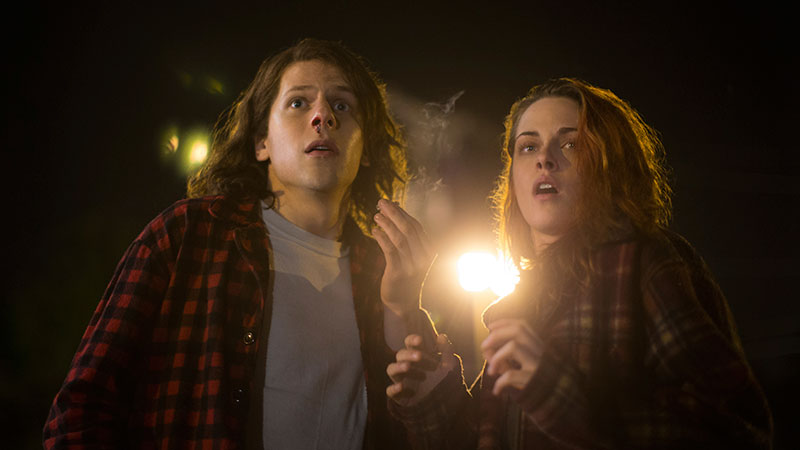 American Ultra is a fast-paced action comedy about Mike [Jesse Eisenberg], a seemingly hapless and unmotivated stoner whose small-town life with his live-in girlfriend, Phoebe [Kristen Stewart], is suddenly turned upside down. Unbeknownst to him, Mike is actually a highly trained, lethal sleeper agent. 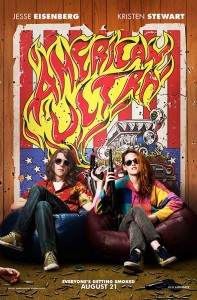 With the bible developed for the film in hand, director Nima Nourizadeh and director of photography Michael Bonvillain went through the script scene by scene to design their shots. The biggest challenges the filmmakers faced involved creating the explosive action envisioned by the director and the writer, while sticking to a relatively modest budget.

“If you take the story down to its most basic elements, it’s about this guy who wants to propose to his girlfriend but his world gets turned upside down,” says director Nima Nourizadeh. For the director, who earned accolades in Hollywood for his 2012 debut film, Project X, this script stood out in the action-comedy genre.

The inspiration for the action/comedy is a real-life CIA attempt to create super warriors that lasted three decades. The formerly covert program, known as MK Ultra, was launched in the 1950s in an effort to turn ordinary citizens into superhero-level operatives. Using psychotropic drugs to enhance psychological conditioning, better known as torture, government scientists treated the human brain like a computer and attempted to radically reprogram their subjects to be the most effective and dangerous assets possible. The attempt to turn out a generation of Jason Bourne-like super assassins failed miserably.

Writer Max Landis and director first met in April 2013 to exchange ideas about future projects. Landis told Nourizadeh about American Ultra, a spec script no one outside of his team had read yet. “The script really exceeded my expectations,” says the director.

Jesse Eisenberg, whose previous roles have included The Social Network, Adventureland and Zombieland, was the filmmakers’ first choice to play the slacker-turned-superspy. “We knew it had to be Jesse,” says Alpert. “You just buy him as an innocent, small-town stoner.” Eisenberg was quick to sign on after reading the script. “I’d never read anything like it,” he says. “The characters felt totally real, the situations are surprising and the way we deal with them seems very truthful.”

Mike’s girlfriend, Phoebe, played by Kristen Stewart, is much more driven than she lets on. Stewart and Eisenberg, who starred in 2009’s Adventureland, had instant chemistry, Nourizadeh says. After meeting with the pair together, the filmmakers were sure they would be convincing and appealing as a couple dedicated to getting baked together. Stewart admits she jumped at the chance to work with Eisenberg again. “We should make a movie together every five years,” she says.

Louisiana, which has seen a dramatic uptick in production over the last decade, provided the filmmakers with a first-rate support system under sometimes trying circumstances. “We had to deal with everything from snakes and gators to torrential rain,” says Alpert. “A lot of crews would have rebelled, but these people were like Marines. If we said take the beaches, they took the beaches.” Production designer Richard Bridgland transformed rural Louisiana into small-town West Virginia using a palette of reds and other warm, homey colors in contrast to the icy neutrals of CIA headquarters.