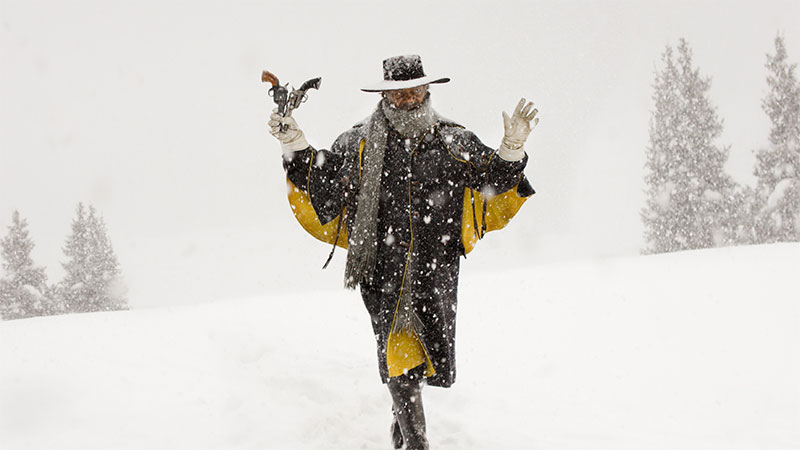 Six or eight or twelve years after the Civil War, a stagecoach hurtles through the wintry Wyoming landscape. The passengers, bounty hunter John Ruth (Kurt Russell) and his fugitive Daisy Domergue (Jennifer Jason Leigh), race towards the town of Red Rock where Ruth, known in these parts as “The Hangman,” will bring Domergue to justice. Along the road, they encounter two strangers: Major Marquis Warren (Samuel L. Jackson), a black former union soldier turned infamous bounty hunter, and Chris Mannix (Walton Goggins), a southern renegade who claims to be the town’s new Sheriff. Losing their lead on the blizzard, Ruth, Domergue, Warren and Mannix seek refuge at Minnie’s Haberdashery, a stagecoach stopover on a mountain pass. 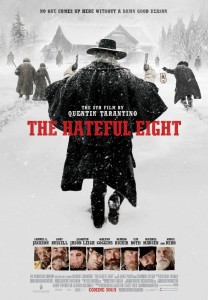 In keeping with Tarantino’s appreciation for film and a bygone era of distribution, THE HATEFUL EIGHT will be released domestically on December 25, 2015 exclusively in theaters equipped to project 70mm film. The movie palace experience will live again in one hundred theaters with an exclusive roadshow in the largest 70mm release in over twenty years.

Russell was not informed of the scale of the reading when he signed on to play John “The Hangman” Ruth. During the three-day rehearsal process, the actor heard rumblings from his fellow cast about a “theater.” Russell remembers: “I said, ‘Wait a minute. What are you talking about?’”
“And then I found out we were going to be doing this at a theater with sixteen hundred seats for charity. I thought, ‘OK, this is good,’” Russell muses.

“I have terrible stage fright,” Tim Roth recalls. “It was a mixture of film and theater, the reading. It was extraordinary fun. I was exhausted by the end of it. Everyone was revved up, and excited, and nervous. Quentin made a show out of it, and it was a hot ticket.”

Although Tarantino intended for the reading to be a standalone event, the overwhelming response inspired the director to reconsider immortalizing The Hateful Eight on film. “People gave us a standing ovation after the reading, which was amazing,” Samuel L. Jackson, who plays Major Marquis Warren, recalls. “We all looked at each other, thinking, ‘how’s he not going to make this movie after that?” Roughly eight months later, principal photography on The Hateful Eight began in Telluride, Colorado.

As a fan of Tarantino’s films, Channing Tatum was honored to join a cast of Tarantino regulars. Tatum comments: “It’s pretty special. You’re inducted into the Quentin Tarantino alumni, in a way. When I came to the first table people, I could feel a real camaraderie that only people who have worked with Quentin would have.”

Anyone in attendance at the staged reading would have heard Tarantino remark — more than once — that THE HATEFUL EIGHT would be filmed “in glorious 70mm.” Tarantino went one step further: he chose to film in a stunning, long-dormant format called Ultra Panavision 70. Last used in 1966 on KHARTOUM, Ultra Panavision 70 employs anamorphic lenses (as opposed to traditional spherical lenses) to create a “gloriously” wide aspect ratio of 2.76:1.

“Capturing this bleak Western landscape, capturing the snow, capturing the beauty of these locations would be perfect for 70mm,” Tarantino says, noting that the format also brings intensity to the film’s interiors.

Breaking new and old ground was no small feat. Once Tarantino and director of photography Robert Richardson chose to move forward with Ultra Panavision 70, Panavision’s Bob Harvey, Jim Raudebush and Dan Sasaki gathered and refurbished equipment that is a part of film history. Panavision pulled fifteen lenses from storage and displays, including lenses used on the chariot sequence in BEN HUR, and reconstructed them for use with contemporary cameras. The antique lenses exceeded expectations and reminded the cast and crew of the richness that the process brought to the epic widescreen masterpieces of the 1960s.

The roadshow experience features an exclusive overture composed by the legendary Ennio Morricone. Tarantino journeyed to Rome to meet with the composer after the film wrapped production last summer. Unfortunately for Tarantino, Morricone was busy with another project and could not commit to THE HATEFUL EIGHT, although the composer noted that he was inspired to write a theme after reading the script. Disappointed but understanding, Tarantino continued his meeting with Morricone, though the conversation shifted to small talk. The next day, the tireless Morricone told Tarantino that he had written another piece for the film. Bit by bit, Morricone weaved together the tense, haunting score for THE HATEFUL EIGHT.

Chosen for its unspoiled, stunning vistas, Telluride’s stretch of the Colorado Rockies became home to Minnie’s Haberdashery, the mountainside stopover where “The Hateful Eight” converge. The Haberdashery was constructed on the Schmid Family Ranch on Wilson Mesa.

“For a rocky, brutal, unforgiving winter western you need a rugged, unforgiving, cold, wintery western terrain, and we looked everywhere” Sher remembers. “The proximity of the Colorado Rockies doubling for Wyoming really gave you the feeling that these were going to be harsh times for these characters, and that there would be circumstances that were both magnificent, and awe-inspiring, and terrifying, and definitely unforgiving.”

After settling on a location, Yohei Taneda, the production designer responsible for KILL BILL’s “House of Blue Leaves,” designed Minnie’s. Taneda, who is a fan of westerns, was happy to put his stamp on the genre. “I was a big fan of western films because my father was a fan of western films,” Taneda says. SHANE is my favorite movie. The store is many things: a drug store, bar, and restaurant.”

At the suggestion of some of Telluride’s elected officials, the production participated in a ski burn, a town tradition that is meant to bring much-needed snow to the region. Many of the cast participated, along with locals and employees of nearby ski resorts. A huge snowstorm arrived just in time for the production to complete filming.

Following their time in Telluride, the production moved to Red Studios in Los Angeles. Refrigeration units made the stage replicate the air in Telluride. “I thought I would miss the adversity that we faced in Colorado. Lo and behold, we get to Los Angeles and that goddamn stage is twenty-nine degrees,” Goggins muses. It’s colder here than it ever was in Colorado. That’s how Quentin likes it. He wants people to feel it, and it isn’t manufactured breath. He wants to see your breath.”

Despite the difficulties of shooting in an ice box or aboard a stagecoach in a blizzard, none of the actors would trade any of their ninety-one days filming THE HATEFUL EIGHT.