The Expendables is a 2010 American ensemble action-war film written by David Callaham and Sylvester Stallone, and directed by Stallone. Filming began on March 28, 2009, in Rio de Janeiro, New Orleans, and Los Angeles, and the film was released on August 13, 2010. 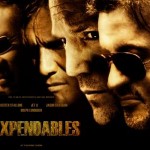 Jean-Claude Van Damme was personally offered a role by Stallone, but turned it down because he felt there was no substance to the character. Stallone said that Van Damme told him that he should “be trying to save people in South Central.” Dolph Lundgren was then cast as Jensen.

The film is about a group of elite mercenaries, tasked with a mission to overthrow a Latin American dictator. It pays tribute to the blockbuster action films of the 1980s and early 1990s, and stars an array of action veterans from those decades, including Stallone, Dolph Lundgren, Mickey Rourke, Jet Li, Bruce Willis and Arnold Schwarzenegger (the latter two in cameo roles), as well as more recent stars such as Jason Statham, Terry Crews, Randy Couture, and Steve Austin.

The film received mixed reviews from critics but was commercially successful, opening at number one at the U.S. box office.

Film production began on March 3, 2009, with a budget of $82 million. Filming commenced 25 days later in Rio de Janeiro and other locations in Brazil, including Mangaratiba, Niteroi, Guanabara Bay, Colônia Juliano Moreira and Parque Lage. Filming originally ended on April 25 but was continued on May 11, in Elmwood and New Orleans, Louisana, including the French Quarter, St. Peter Street, Fort Macomb, Claiborne Avenue and the Interstate 10 overpass.

Filming officially ended on July 1, but on October 27 there was a pick-up scene at a church in Hollywood featuring Stallone, Schwarzenegger and Willis. On June 2, West Coast Customs Street Customs built three customized 1955 Ford F100s for Sylvester Stallone for the film. One was built for a crash scene, the second for green screen and the third for Stallone to keep. “The Expendables has a seventy million-dollar budget,” says Stallone’s co-star Dolph Lundgren, adding, “It’s an old-school, kick-ass action movie where people are fighting with knives and shooting at each other.”

In summer 2010, Brazilian company O2 Filmes released a statement saying it was still owed more than $2 million US for its work on the film.

Jensen instigates a firefight, causing casualties for the pirates. With moral disagreements over hanging a pirate, Yang and Jensen fight with Ross intervening. As a result of his psychological problems, Ross reluctantly releases Jensen from the Expendables.