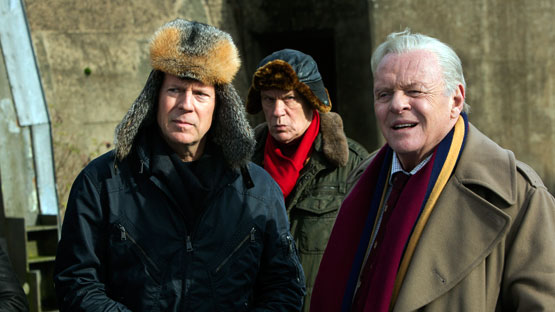 “From the beginning, our goal was to provide the audience with a bigger, more expansive experience than the first movie,” says producer Lorenzo di Bonaventura

The filmmakers were cognizant that in order to hold onto the comedic elements of the story they had to commit to the action and adventure first and then “the concerns of the characters which at times seem ludicrous become believable,” says director Parisot. “The structure is of an action movie but the characters are comedic because they can’t resolve their absurd issues which are happening during a lot of extreme violence.”

The anticipated sequel began production Sept. 14, 2012 in Montreal at the Olympic Stadium. Built for the 1976 summer Olympic Games, the facility, like nearly all the multi-use stadiums built in the 6 United States during the 1970s, is rarely used. The concrete dominated structure’s concourses have a very “bunker-like” look, so it dovetailed nicely with the need for the British government’s MI6 secret location.

Production continued for 14 shooting days with locations including a spectacular home that doubled for “The Frog’s” Paris apartment. Built in 1914 by famed architect Jean-Omer Marchand it is located on Wood St. in Montreal’s fashionable Westmount section. Other Montreal locations include a former branch of the Royal Bank of Canada in Old Montreal; St.-Andrew’s church in Chateauguay; the opening scene of the movie was shot in a Costco; the City of Montreal’s Finance Building stood in for the Kremlin’s headquarters and north of the city in St-Colomban was the set for Hank’s Internet Café, which 30 years earlier was the resort the Colford Inn.

The company moved on to London with the first scene shot featuring Willis, Malkovich, Parker and Mirren on a Thames riverboat cruise. London’s Fishmonger’s Hall was utilized as the Iranian embassy in its courtyard and the ornate Banqueting Hall.