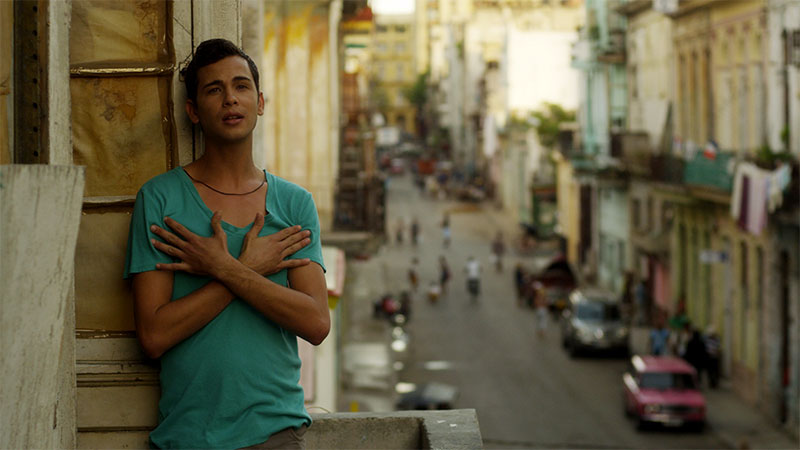 VIVA stars Héctor Medina as Jesus, a young hairdresser working at a Havana nightclub that showcases drag performers, who dreams of being a performer himself. Encouraged by his mentor, Mama (Luis Alberto García), Jesus finally gets his chance to take the stage. But when his estranged father Angel (Jorge Perugorría) abruptly reenters his life, his world is quickly turned upside down. As father and son clash over their opposing expectations of each other, VIVA becomes a love story as the men struggle to understand one another and reconcile as a family. 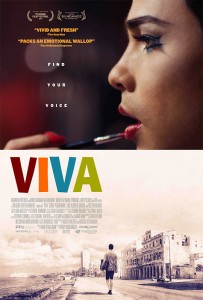 VIVA was a hit at the 2015 Telluride Film Festival, and is Ireland’s entry for the Best Foreign Film Academy Award

I was inspired to make VIVA when I saw some drag shows in Havana. A sheet hung up in a suburban backyard and a single light bulb created a theatre and a world of dreams out of nothing. This power of transformation and creation was driven by a desire to express identity in a raw, unabashed passionate voice. It was intoxicating.

I wanted to take that vivid romantic tone and place it in a world of naturalistic cinema. When I discovered the great wealth of Cuban acting talent it allowed me to push that mix of an exuberant emotional tone and an aesthetic of authenticity and naturalism even further.

Screenwriter Mark O’Halloran and I wanted to explore a theme of transformation and the alchemy of connecting to deeper truths through the use of artifice. At the heart of the story is a battle for identity and love between a father and son. The romantic plaintive female voice in Jesus’s mother’s record collection almost serves as another character and occupies a higher order that inspires the men of the story to become truly themselves. I wanted to tell a story where we find light in a dark place and where what is perceived as weakness transforms to be seen as strength.

MARK O’HALLORAN – Writer
Mark is a writer/ actor and is from County Clare, Ireland. As an actor he has worked with all the major theatre companies in Ireland, most recently in the acclaimed production of “The Shadow of a Gunman” with The Abbey Theatre in Dublin. On screen he has appeared in numerous films, most notably as one of the eponymous heroes in Adam & Paul for which he also wrote the screenplay and the lead role of MP in History’s Future directed by Fiona Tan. He also appears in The Guard and Calvary

Héctor Medina (Jesus)
Héctor is one of Cuba’s rising acting talents. From Pinar del Rio, he studied acting at the National School of Art (ENA). Since finishing his studies he has worked with leading theatrical groups like Buendia (“The Importance of Being Earnest,” 2009) and El Publico (“German Cabaret” and “Midsummer’s Night Dream,” both in 2010).

Jorge Perugorría (Angel)
Jorge aka Pichi is a celebrated actor, director and artist from Havana, Cuba. He is best known for his role as Diego in Strawberry and Chocolate (1993), for which we won First Award at the Havana Film Festival and Special Jury Prize at the Berlin Film Festival and became the first Cuban film to be nominated for an Oscar.

Luis Alberto García (Mama)
Luis has received countless awards for acting and has represented Cuban cinema at festivals around the world. As a director Luis has directed feature film Clandestine Stories in Havana (1997) and documentary Leal al Tempo (2008) which is dedicated to the work of Cuban historian Eusebio Leal Spengler.