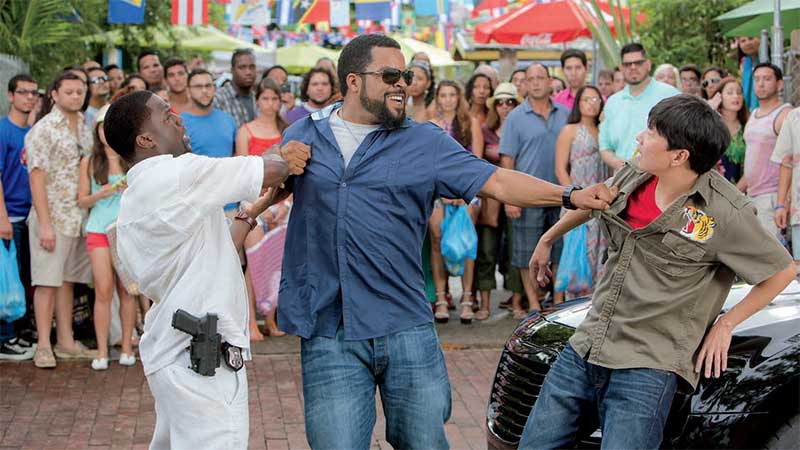 The sequel picks up about a year after our heroes’ last adventure. Plans for a quick trip to Miami go awry when their unorthodox policing gets them into a compromising situation that threatens to derail a major case…and Ben and Angela’s upcoming wedding day. 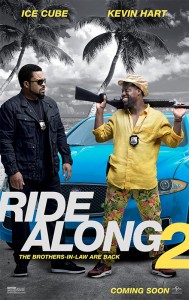 Whether it was following James and Ben as they rolled down the infamous A1A coastal byway or as they chased down AJ in Little Havana, Miami offered everything the production could hope for. Ride Along 2 marks the 4th time that director Tim Story directs Kevin Hart.

In early 2014, Universal Pictures’ Ride Along became an instant hit, grossing more than $150 million worldwide as audiences fell hard for the unlikely comic pairing of Ice Cube and Kevin Hart. And while most sequels don’t begin preproduction until well after moviegoers experience the first, Ride Along 2 was a follow up that the filmmakers knew they had to do.

According to producer Will Packer, “The sequel was actually contemplated while we were shooting the first film. We knew we had magic with the dynamic of Cube and Kevin” Director Tim Story agrees, offering that early in the editing process he felt they had a franchise in the making.

The filmmakers, recognizing the possibilities, maximized the dynamic between the two stars. “You’ve got the great juxtaposition of Cube and Kevin. Their real-life personalities that they bring to these characters play off each other well,” commends producer Will Packer. “With Cube’s stern, straight, classic, iconic scowl, alongside Kevin’s silliness and a good script by Phil and Matt… we were in business.”

Joining Packer and Cube as fellow returning producers were Larry Brezner and Matt Alvarez. According to Alvarez, who has been Cube’s producer for some time, “We were fortunate not only to get the guys back together, but multiple members of our core cast and crew. It’s a testament to Phil and Matt’s screenplay that so many were excited to return, and it would be impossible to achieve the delicate balance of comedy and action without the sum total of their work.”

Tika Sumpter, who plays Angela Payton, James’ sister who is now engaged to Ben, was elated to be back with her on-screen brother and fiancé. She says: “It was like a family reunion; we started where we left off.” In her best Hart impersonation, Sumpter reflects on her experience shooting Ride Along 2: “When Kevin first saw me, he said, ‘Uh…Tika, this isn’t a real wedding. Don’t be all up on me. I’m taken already!’ Then later, he would switch it up and say, ‘Do you need tongue in this take?’ He is just so silly. I have to say, ‘Okay, little man, relax.’ We have a brother-sister loving relationship. I love our chemistry, and it’s fun to be a part of anything that he’s a part of.”

Actor Ken Jeong was tapped to play clandestine computer hacker AJ, who becomes a key piece in the puzzle to solve James’ case in Miami. Cube was equally pleased to have Jeong join the returning cast members, commending: “When I heard Ken was going to be part of the movie, I knew we had something special. He has his own brand of comedy.” Story put Jeong at ease on set, allowing his input into shaping his character. Recalls Jeong: “One of my favorite days on set was my first one. We were in South Beach, and it was actually my idea to get on the phone with Kevin and record us having a conversation together. We were able to establish our rhythm, and it set the tone for us.”

Initially, the filmmakers set their sights on Olivia Munn for the role of James’ foil. At first, the star of The Newsroom and the upcoming X-Men: Apocalypse wasn’t sure if the scheduling was going to work out for her to join the cast. Then, she met Hart at a television awards show and they immediately hit it off. Munn recalls: “Once I hung out with Kevin, we were immediately like brother and sister. I called my reps and told them that we’ve got to figure out a way to make this work in my schedule, because I just love this guy so much. I wanted to be a part of this movie.”

The final major key player came in the form of suave Antonio Pope—the antagonist in Ride Along 2. Seasoned veteran actor Benjamin Bratt was the first choice for the role. For Bratt, boarding the film was a no-brainer. “I was thrilled to become a part of this company because I’ve actually never been a part of an action-comedy before,” he offers.

To give Ride Along 2 its flavor, Packer and Story flew to Miami to scout the world-famous Ocean Drive in South Beach that was outlined in Phil Hay and Matt Manfredi’s script. The director sums: “We were looking for a place to up the stakes and the visual presentation.” Packer offers that Miami’s history was instrumental in selecting the movie’s location: “Miami is where all the fictional movie criminal minds live. That’s where they are, and we’re following the tradition of some of the great Miami action movies.”

While shooting in South Florida was sure to bring occasional inclement weather, no one knew the extent of it. Munn laughs: “Nobody looked at weather.com to see that we were shooting in Miami during hurricane season. Many of our days we had to stop in the middle of the day.” Still, she admits that Packer and Story kept them sane throughout the process.

Although the majority of the film is shot in Miami, Packer used his connections to secure the space in Atlanta that would serve as a template for production designer Chris Cornwell and cinematographer Mitchell Amundsen to create the nightclub to end all hotspots. The producer explains: “We wanted this club to have a very Miami feel, and we wanted it to be something different and cinematic. I reached out to some of my friends at the Georgia State Capitol, and they actually allowed us to film our club scene and our shootout there. So we brought in our crews, and, over the course of a few days, they transformed the Georgia State Capitol building into a nightclub set in Miami.”