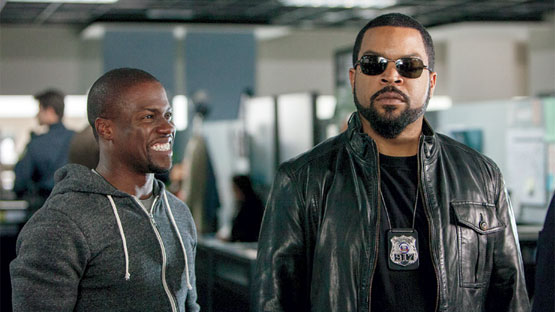 Ice Cube and Kevin Hart  lead the lineup in Ride Along, the new film from Tim Story. When a fast-talking guy joins his girlfriend’s brother—a hot-tempered cop—to patrol the streets of Atlanta, he gets entangled in the officer’s latest case. Now, in order to prove that he deserves his future bride, he must survive the most insane 24 hours of his life. 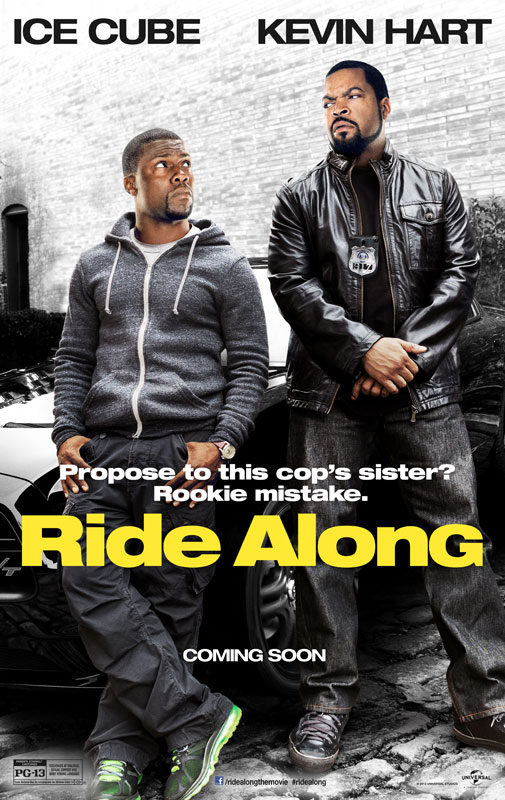 Ice Cube shares how the action-comedy made its way to Universal Pictures: “The movie had been over at New Line, but it just wasn’t coming together. Then we started getting more traction and heard that Kevin Hart loved the script, and I admired his stand-up a lot. So we came to Universal with the movie; then we got Kevin and our director, Tim Story. They worked together on Think Like a Man, and I worked with Tim on Barbershop, so we’re getting the band back together.”

Joining Ice Cube and Kevin Hart for the action-comedy are John Leguizamo and Bryan Callen as Santiago and Miggs, James’ fellow officers on the force; Bruce MgGill as Lieutenant Brooks, the men’s harried officer-in-charge; and Laurence Fishburne as Omar, the mysterious ruler of the crime-ridden underworld.

Ride Along began its journey to the big screen several years ago when writer Greg Coolidge pitched producer Larry Brezner his idea for a buddy comedy. Ice Cube’s longtime production partner, Matt Alvarez, discusses his team’s interest in developing the action-comedy for Cube and Hart, which dovetailed with Brezner: “There was a void in the marketplace for buddy-action movies. We approached this film by going back to the classics like 48 Hours, Midnight Run, even Beverly Hills Cop. When we dove into this, we wanted to go back to the movies that we grew up on—classics that still resonate with an audience.”

Of the creative process, Bryan Callen shares: “Now what Tim, Will and Cube do is allow us, because we’re comedians, to take liberties. So we’d come with suggestions and we’d say, ‘This might be funny; let’s try this.’ That’s where they use our improvisation skills, and that’s what’s been so satisfying. I was able to try material off-the-cuff and feel safe to do it.”

From the first scene in the movie, many visitors to Atlanta will know exactly where the action is about to take place. With its lush neighborhoods and industrial inlets, Atlanta is home to both ends of the Southern hospitality spectrum. That said, it also brings in the seedy underworld of crime—and international crime at that. Atlanta’s industrial culs-de-sac shrouded in darkness are perfect for the surly happenings in this story.

On the flip side are the suburban neighborhoods, quaint and quiet, straight out of Southern Living magazine. Still, Atlanta has a strong urban community and nothing says Atlanta urban life more than a black car with a matte finish, which James rides so effortlessly through the streets of Georgia’s capital city.

There’s so much action in this film even the experienced Tim Story was challenged. “I must admit, I’ve never blown up an entire building. I’ve done it in CG so I looked forward to fire and pyrotechnics,” says the director. “There’s only one reason to do this stuff—if you do it big. So we set the entire place on fire.”