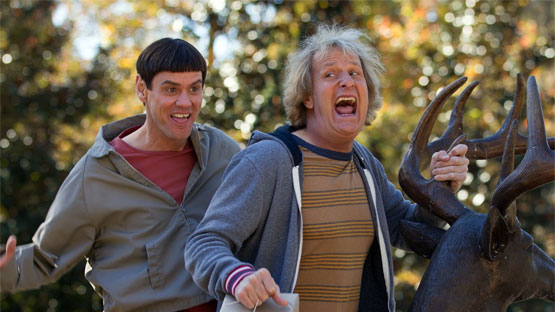 Jim Carrey and Jeff Daniels reprise their signature roles as Lloyd Christmas and Harry Dunne in the sequel to the smash hit that took the physical comedy and kicked it in the nuts: Dumb and Dumber To. The original film’s directors, brothers Peter Farelly and Bobby Farrelly, take Lloyd and Harry on a road trip to find a child Harry never knew he had and the responsibility neither should ever, ever be given. 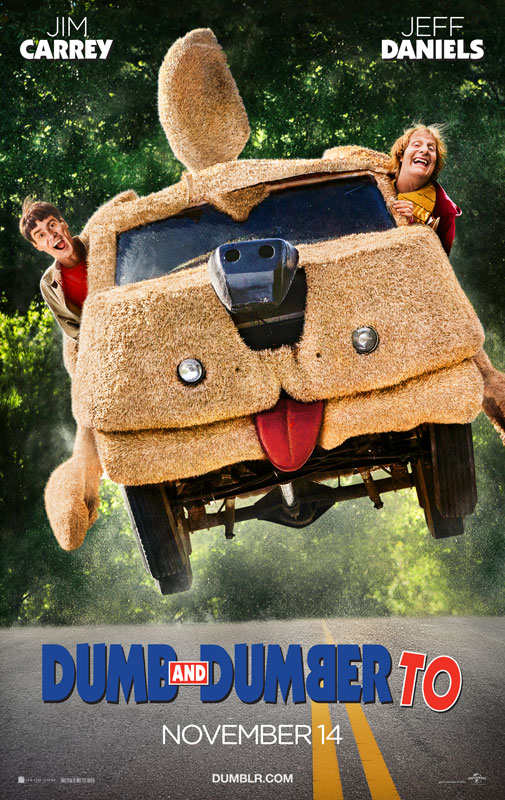 Dumb and Dumber To was a professional reunion for Carrey and Turner, as the pair worked together nearly 30 years ago on Peggy Sue Got Married.

The 1994 release of Dumb and Dumber is rather unique in movie history: at almost $250 million worldwide, it became a bona fide box-office smash, yet, oddly enough, it is still often referred to as a cult classic. Although the creative team behind the first movie considered, pondered and chewed on a next chapter for our unlikely heroes, it would be a few decades before the stars would align and the sequel would begin production.

Momentum for a sequel gained speed a few years ago when Carrey found himself in a hotel room watching the breakout comedy on television. “I had seen bits and pieces of Dumb and Dumber a number of times,” he explains, “but this time I sat and watched it and was laughing and couldn’t believe some of the stuff we did. We captured lightning in a bottle.” In recent years, Daniels and Carrey have often been approached by teens who were enthralled with the movie that they were introduced to by their parents.

Peter Farrelly reached out to Bennett Yellin, the brothers’ collaborator on the first film, and advised him of a plotline that involved Harry and Lloyd looking for a possible love child because Harry needed a new kidney. Alongside Sean Anders & John Morris, who had written on Carrey’s recent family film, Mr. Poppers’ Penguins, and Mike Cerrone, with whom the brothers had collaborated on Me, Myself & Irene and The Three Stooges, the reunion story began the process of taking comic shape. The core team, led by producers Wessler and Thomas, was reunited, and it was full steam ahead. The Farrellys ultimately settled on the simplest premise that would allow for Carrey and Daniels to do what they do best: The tale would pick up 20 years later, and the guys are middle-aged and still stupid.

Beyond the enduring appeal of the two leads, the Farrellys wanted to infuse the comedy with characters who weren’t simply playing straight men to Lloyd and Harry’s antics. In the first movie, there was only a passing reference to Fraida Felcher, but in Dumb and Dumber To, “the chick from Cranston” comes to life in the form of Academy Award® nominee Kathleen Turner.

Comedic performer Rob Riggle was cast in the film in the roles of twin brothers Travis and Captain Lippincott. The first time Riggle worked with Carrey and Daniels is something that remains with him. “We were doing a scene of us driving in the car and I was thinking to myself, ‘I’m in a scene with Jim and Jeff…and I’m the third guy,’” recalls the performer. “It was a cool moment, but it took me a take or two to refocus and get back into the scene.”

Production commenced in September 2013 in Atlanta, Georgia, and the public got its first look at Carrey and Daniels as Lloyd and Harry. The guys’ old apartment building in Providence, Rhode Island, was re-created over three weeks on a vacant lot on Pearl Street in the Atlanta neighborhood of Cabbagetown. Yes, Billy in 4C (BRADY BLUHM) is back, and there are still issues with the guys, him and his birds. The filmmakers rediscovered Brady via Facebook and learned that he is now working as a teacher and living in Southern California. “I had no clue those two lines from the first movie would follow me for the rest of my life,” laughs Bluhm.

West Park Square in El Paso was created with the use of Marietta Square in Glover Park for two days of shooting as Carrey and Daniels cruised through on a Zamboni ice resurfacer. Of course, the Zamboni was not the real McCoy, but rather a creation from transportation.