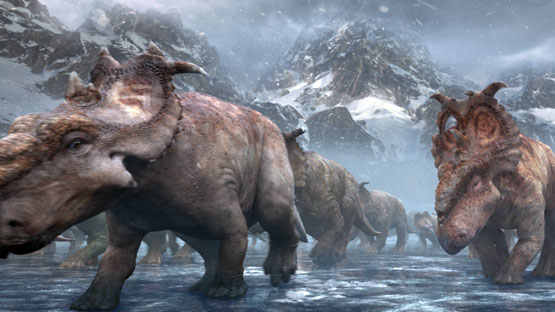 Twentieth Century Fox and Reliance Entertainment present in association with IM Global, a BBC Earth Films and Evergreen Studios Production in association with Animal Logic, WALKING WITH DINOSAURS. The 3D family adventure stars John Leguizamo, Justin Long and Karl Urban.  It is directed by Barry Cook and Neil Nightingale from a screenplay by John Collee.  Music is by Paul Leonard-Morgan. 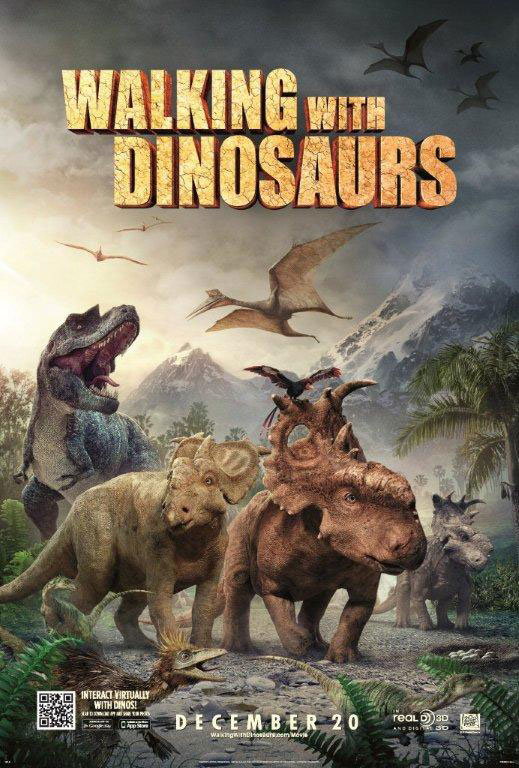 In the course of their exhaustive research, the filmmakers learned about many dinosaur species that lived in Arctic Alaska and Canada 70 million years ago.

WALKING WITH DINOSAURS presented a unique creative challenge to its filmmakers, who had to project themselves back in time – 70 million years – to what is now the U.S. state of Alaska, in the Late Cretaceous Period.  Then, they had to imagine the myriad adventures a lovable young dinosaur might encounter on an odyssey unlike any other.

“WALKING WITH DINOSAURS is a story about a dinosaur’s life and adventures, and we’ve gone to the ends of the world to film it!” says director Barry Cook.  With WALKING WITH DINOSAURS, Cook inhabits a world far away and long, long ago – and makes it come spectacularly alive.

Also taking on directing duties is Neil Nightingale, a filmmaker admired around the world for his ability to capture nature’s wonders in ways you’ve never experienced.  “Life’s fundamentals have not really changed since the time of the dinosaurs,” says Nightingale, who is Creative Director at BBC Earth, where he spearheads the development of new forms of commercial content.

Screenwriter John Collee’s tale introduces us to the movies’ newest hero: Patchi.  Ever curious, always brave and unfailingly optimistic, Patchi pretty much has us at “hello” – when we meet him as a hatchling, and then share his adventures as he grows to adulthood.  According to actor Justin Long, who voices the role, Patchi has “an insatiable curiosity, as many runts do.” John Leguizamo, having voiced the role of the silly sloth Sid in the blockbuster Ice Age films, embraced the new challenges that came with finding a voice for Alex.

While the filmmakers hold special affection for their young hero, a few confess to a special appreciation for the film’s villain.  “I loved Gorgon; I could make an entire movie about this guy!” says Animation Director Marco Marenghi.

The filmmakers tapped a century of collective research to ensure authenticity in locations and dinosaur renderings.  Director Barry Cook notes that, “Although dinosaurs roamed the Earth millions of years ago, they are relatively new to the human experience.  Only recently have we been able to see these creatures brought to life on film.  We’ve learned more about dinosaurs in the past 100 years than in the rest of combined human history.”

To achieve their goal of transporting audiences back in time, the filmmakers shot most of the environments on location, in the wilds of Alaska and New Zealand. “The intention,” says Nightingale, “was for WALKING WITH DINOSAURS to look as though a real wildlife cameraman had gone back in time to capture the footage.  So we found locations that would replicate, as closely as we could in the modern world, Arctic Alaska in the Cretaceous Period.”