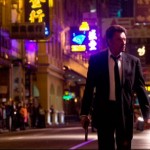 Vengeance is a French and Hong Kong co-production between Hong Kong companies Media Asia and French distributor ARP Sélection. The film was produced by Milkyway Image, the independent production company founded by director Johnnie To and screenwriter Wai Ka-Fai

The film was produced by Milkyway Image, and released by ARP Sélection in France, and Media Asia Films in Hong Kong. Vengeance tells the story of Francis Costello, a French chef and former asssasin. When his daughter, son-in-law and grandchildren are attacked by a gang of Triads, Costello heads to Macau to embark on a violent quest for revenge, enlisting the aid of three hitmen.

The idea of Johnnie To directing an English-language film originated with the ARP co-founders and French producers Michèle and Laurent Pétin, who had Alain Delon in mind for the lead role. In 2006, after the Pétins approached him with their idea, To met with Delon, who was not interested in making the film. The Pétins later recommended Johnny Hallyday, and Hallyday was cast in the lead role after meeting with the director in early 2008.

Principal photography for Vengeance began in November 2008, and concluded in February 2009; filming took place on location in Hong Kong and Macau, with a crew mainly based in Hong Kong. Production of the film required that To work with a complete shooting script, but he insisted on having his actors improvise the scenes.

Vengeance competed for the prestigious Palme D’Or award at the 62nd Cannes Film Festival, and was released theatrically in France on 20 May 2009. The film was later released in Hong Kong on 20 August 2010. It premiered in North America at the 2009 Toronto International Film Festival.

The film was met with positive reviews; critics praised various aspects of the film, such as To’s direction, Hallyday’s performance, as well as the cinematography and editing. During its theatrical run, Vengeance grossed over US$1.3 million worldwide, having been released in Asia and parts of Europe.

In the United States, the film is being distributed by IFC Films, which has made it available as a video-on-demand selection on pay television formats.