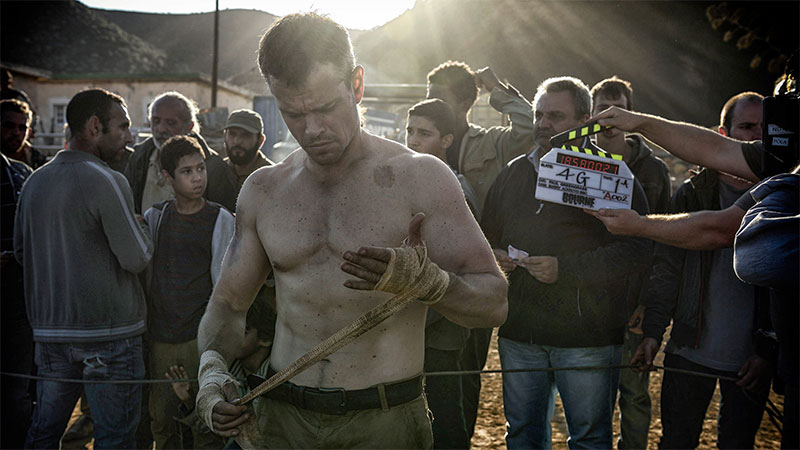 Almost two decades ago, a brilliant young soldier volunteered for an experimental special-ops program after he was told that terrorists killed his father.  He was promised he could honor his family and country by evolving an already impressive intellect, deft agility and adaptable skillset into the unimaginable. It was all a lie. 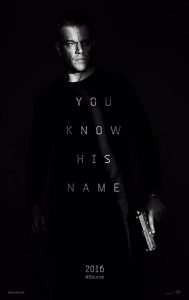 Prior to embarking on 2002’s The Bourne Identity, it was suggested to the actor that boxing would influence the character’s walk and how he carried himself, so Damon trained in boxing every day for six months—starting out with the basics and footwork—and he’s kept up with the sport ever since.

A lot has happened in the world since operative Jason Bourne went off the grid at the end of 2007’s The Bourne Ultimatum—and it’s precisely the passage of time that has allowed for his return.  Filmmakers had long sought the precise confluence of socio-political events that would provide the iconic Bourne with the right global stage that could further his story, and these started to align in 2014.

Producer Frank Marshall—who’s been aboard the Bourne team from the first film—says: “We finally came up with a story that is current and relevant to justify Bourne coming back.  ”

Producer Gregory Goodman says that what Greengrass and his longtime collaborator, Christopher Rouse, created in their screenplay was not only timely, it was propulsive: “I believe that waiting was a very good thing, because it gives the movie a chance to speak to much more serious issues and to be honest.  A lot of the paranoia and concerns that were brought up in the previous films seems almost naïve compared to what we’re dealing with in a post-Snowden, WikiLeaks world”

The issues of balancing global privacy with state security were fascinating to Rouse and Greengrass, and it was important to the writing partners that Bourne be haunted by his actions from the last film.  Filmmakers admit that it was the want-to-see of fans that played a large part in this latest installment.  But they also admit to the popularity of both their lead actor and the character he so indelibly created.

Stylistic discussion aside, Damon says: “At the end of the day, the No. 1 reason that we made the movie was because people wanted to see it.  Every airport I’m in, or every time I’m walking down the street and somebody stops me, that’s the first question: ‘Are you going to do another Bourne movie?’”

It is one of the constants i nBourne fragmented life, fellow operative Nicky Parsons, who brings a possible path out of Bourne’s sunless existence. Parsons is once again played by the returning Julia Stiles, who relates something many don’t know about her character: “Originally, Nicky, at the very end of The Bourne Identity, was thrown up against a wall, breaking her neck.  But, luckily for me, they re-cut it and 15 years later, here I am.” “When I got cast, I remember thinking—but I didn’t say this out loud—‘I’m too young to be in the CIA.’  I was 19 at the time,” shares Stiles.

The passage of time has also brought about changes in the top brass inside the agency.  Now in charge is CIA director Robert Dewey, a seasoned veteran and complex player.  “One of the biggest challenges,” explains Greengrass, “was finding that strong antagonist to Bourne.  We’ve had some great characters on that side of the story, played by Brian Cox, Chris Cooper, David Strathairn.  We were incredibly lucky to get Tommy Lee Jones to play in that league.  He embraced the role and our working process—the madness is not quite what he’s been used to, but he did it with a great deal of humor and seemed to have a lot of fun.”

In keeping timely, Greengrass and Rouse created one of the key members of Dewey’s team to be Heather Lee, played by Oscar® winner Alicia Vikander.  A prodigy hacker. For Rouse, who has been with the series since the beginning, it was critical that he and Greengrass brought a strong, young female character to the world they’ve created.   Greengrass affirms: “ I’d seen Alicia in Ex Machina and The Danish Girl, and she’s fantastic.  But in all honesty, I didn’t think she would do it.  For me, when you’re first starting a film, the first part you offer is very important—it can be a reality check.  So, I asked her to lunch.”

That meal proved to be quite a full-circle moment for the actress.  On Vikander: “When Paul and I met, I told him something that he probably thought I made up expressly for our meeting.  But, it was the truth!  When I first came to London, I shared a flat with three girls, not far from where we wound up shooting in Paddington, actually.  We were so broke that we shared a wardrobe; we shared beds.  On Sundays, when we didn’t have enough money to go to the pub, we would just ask, ‘Should we just go watch Bourne?’  And that’s what we did.  We just watched it over and over.  After I had lunch with Paul, my old roommates were the first ones I called.” Quite soon, Vikander was one of the guys on the Jason Bourne production.

Cast as Kalloor was British actor Riz Ahmed, known for his work in Nightcrawler and Four Lions.  Ahmed found Greengrass and Rouse’s script full of rich characters, and the clues of what was to come were ready for the discovery.

A factor in the successful Bourne oeuvre is the practical international location work—this production utilized locales in Tenerife (the largest of the Canary Islands, off the coast of Morocco), London, Berlin, Washington, D.C., and Las Vegas.  True, soundstage filming was also utilized but, according to Marshall: “We film in real places that people want to see.”

The Jason Bourne production schedule included 85 days of main unit shooting, along with 30 days of 2nd unit—key to the process was the intention of filming the script largely in sequence.  For all signed on to this Greengrass production, they experienced change as a way of daily life—re-written scenes, new fight choreography, entirely new pieces—as many changes as necessary to keep the feel of film in the moment.  Ahmed perhaps speaks for all of the actors when he says: “Paul has this amazing ability to think on his feet and literally write scenes while he’s on the set.”

Personal trainer Jason Walsh worked with Damon on strength and conditioning and, since the actor was already in good shape from his previous two projects, Walsh termed what they did as “fine tuning,” heavily relying on a reverse climber to engage the upper and lower body.