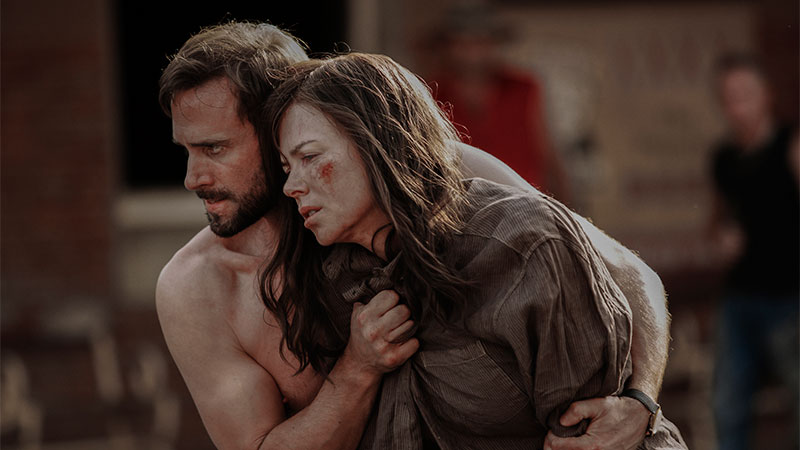 When Catherine (Nicole Kidman) and Matthew Parker’s (Joseph Fiennes) two teenage children suddenly vanish in a dust storm, the couple’s relationship is pushed to the brink as they confront the mystery of their children’s disappearance in the soaring desert heat. Also stars Hugo Weaving. 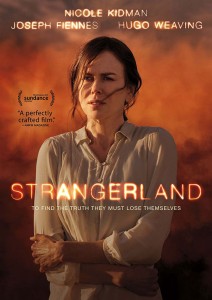 Strangerland is a co-production between Australia and Ireland. This sophisticated contemporary mystery drama comes to the screen after a long gestation, beginning with director Kim Farrant’s original idea of exploring what happens within a family when they are pushed to the edge psychologically and emotionally. From there Kim and screenwriter Fiona Seres devised the story of a family who move to the desert where their teenage kids go missing before a dust storm.

Producer Macdara Kelleher connected with the script after a chance meeting with Kim Farrant whilst at the Cork Film Festival. It was the personal connection to the story that drew him to the project. “As a father, when you read a story about two children who go missing in the outback, even if you don’t have children, you can identify with that. “

Producer Naomi Wenck was equally drawn to the enigmatic themes of the film. “It was incredibly powerful screenplay from the time I first read it. There’s a spatial quality to Strangerland, thematically and visually, that lends the story an unusual beauty.” After some years of development Irish screenwriter Michael Kinirons was brought on board to collaborate on the script, having worked previously with producer Macdara Kelleher.

Nicole Kidman was so drawn to the script that for her, it wasn’t a big leap of faith to commit to working with a first time director or to spending weeks in the heat of the Australian outback “That maybe is just the way in which I approach everything. I read the script and I met with Kim and I really responded to her and the material, it was that simple,” she says. Hugo Weaving, who stars as the detective Rae in the film, had been familiar with and loved the project for many years. “Kim and Fiona Seres approached me, I read the script with them and loved it. We talked about it a lot and I was very keen to be involved.”

In her feature film debut, Maddison Brown shines as the daughter Lily, a highly sexualised teenager, on the cusp of womanhood.

The talented crew had the considerable task of bringing the landscape and setting to life across various locations in NSW (New South Wale). As Producer Macdara Kelleher explains, “We shot the film in three different places, in Sydney, Canowindra and Broken Hill, so any time you move the unit that many times it can be a bit tricky. And then even though we were shooting in the desert, the weather had been unusually rainy at times.”

The key filming location of Canowindra in western NSW welcomed the cast and crew of Strangerland with open arms, despite the inconvenience of a major film crew shutting down the main street for several days. “It’s a town of 2,000 people and everybody knew we were there. They were really welcoming and a lot of them were involved in the film, either working on it or as extras,” says producer Macdara Kelleher.