A bold exploration of the intrigue and perils of infidelity, Tyler Perry’s Temptation is a compelling love story that dives straight into the heart of obsessive passion. “It’s about a woman who starts to get restless in her relationship and her choice to be with another man has a huge effect on the rest of her life,” explains screenwriter/producer/director Tyler Perry. 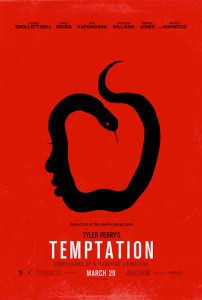 In the film’s final moments, Perry finds a way to do both, unveiling a startling surprise that recasts Judith’s journey in an entirely new light.

Perry’s heroine, Judith played by Jurnee Smollett-Bell, is a small-town girl hailing from a devout, working class background. But for all her ambition, level-headedness and integrity, Judith is inexperienced when it comes to the temptations and vices of urban life, which arrive in the form of a charismatic billionaire named Harley Madison.

Tyler Perry points out that he deliberately cast younger actors in the lead roles so that young audiences would easily relate to the story. As Janice’s assistant, Ava, reality television star Kim Kardashian was able to channel her self-professed “obsession” with fashion directly into the part. “Ava wants to fix everyone around her,” explains Kardashian, “which is how I am with my sisters sometimes. ..”

Despite undergoing a highly publicized divorce during production, Kardashian impressed her fellow actors on set with her focused performance. “People will be surprised,” says Tyler Perry. “She really carries the role and completely owned it on screen. And she has a great sense of humor.”

Tyler Perry’s Temptation was shot in four weeks at Tyler Perry Studios and on location in and around Atlanta. Echoing the reactions of previous actors who’ve worked with Perry, Temptation’s cast members were uniformly impressed with the atmosphere of collaboration and discovery Perry fostered on set. Says Vanessa Williams, “Tyler’s completely driven and down to earth. He knows what he wants. But he also allows you to have creative freedom to add things which makes the process so much fun.”