The Town is a 2010 action crime thriller film starring, co-written and directed by Ben Affleck that is based on Chuck Hogan’s novel Prince of Thieves. 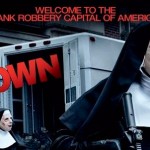 Several reviewers praised the The Town’s action sequences. In his review for the New York Times, A. O. Scott commented on the opening heist, “That sequence, like most of the other action set pieces in the film, is lean, brutal and efficient, and evidence of Mr. Affleck’s skill and self-confidence as a director.”

The motion picture is one of a number of films set in Boston, Massachusetts over the past decade that have formed a “sub-genre” of crime movies, including Affleck’s own Gone Baby Gone.

The production began filming late August 2009 in Boston. The former MASSBank branch located in Melrose, Massachusetts was used as the location for the first robbery of the film, taking on the name Cambridge Merchants Bank (the exterior shots, however, are of Cambridge Savings Bank in Harvard Square). Filming also took place at Mohegan Sun in Uncasville, Connecticut for casino scenes and Massachusetts Correctional Institution – Cedar Junction in Walpole, Massachusetts for use of their visiting room.

The movie was shown at the Venice Film Festival and premiered at Boston’s Fenway Park.

A voice in the trailer of the movie says: “There are over 300 bank robberies in Boston every year. Most of these professionals live in a 1-square-mile neighborhood called Charlestown.” In fact, there were 23 reported bank robberies in the entire state of Massachusetts in the first quarter of 2010, compared with 49 in Illinois and 136 in California, according to the FBI.

The film opened in theaters in the United States on September 17, 2010 to rave reviews, with Rotten Tomatoes giving it a “Certified Fresh” rating with 94% positive critical reviews.