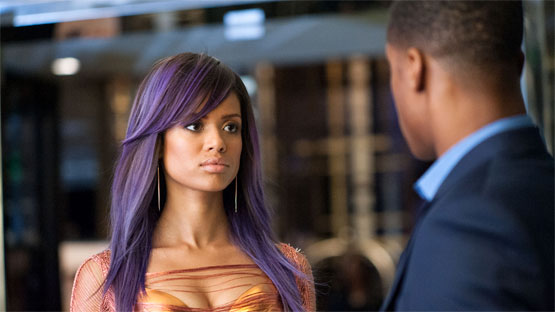 Beyond the Lights is the story of Noni, a hot new award-winning artist who is primed for superstardom. But not all is what it seems, and the pressures cause Noni to nearly fall apart – until she meets Kaz Nicol, a promising young cop and aspiring politician who’s been assigned to her detail. Drawn to each other, Noni and Kaz fall fast and hard, despite the protests of those around them to put their career ambitions ahead of their romance. 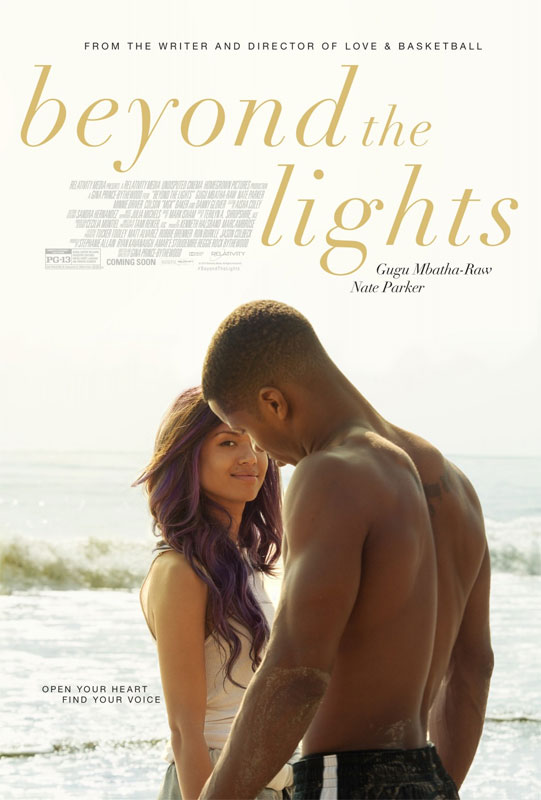 The filmmakers wanted to cast a real hip-hop artist in the role and Colson Baker, better known as Machine Gun Kelly (MGK), made a strong impression on the director. MGK auditioned four times before getting the call.

Writer/director Gina Prince-Bythewood uses music as creative inspiration. So it comes as little surprise that inspiration for her new film came while sitting at an Alicia Keys concert. “Alicia was singing her song ‘Diary’ which is an epic love song, and suddenly this character and love story came into my head. It was one of those rare, great moments as a writer where a movie just starts flowing out.” Inspired by some of her favorite music films like Purple Rain, Lady Sings the Blues, and The Rose, Prince-Bythewood continued to develop the idea of love blossoming within the complicated world of hip hop and R&B.

Over the next four years, the story of Noni evolved with support from husband and producing partner Reggie Rock Bythewood. The director’s ‘first eye,’ Rock-Bythewood describes himself as “the first person she gets to argue with about her vision.” And her vision was simple: “I wanted to create a great love story.” Gina Prince-Bythewood credits her husband for helping her through the writing process. Instead of writing Noni’s mother as African-American, he suggested she take a page from her own book; and make the character Caucasian, and Noni, biracial, like her and her own mother. “Why don’t you touch on your own life because things get stronger when you write from a personal place,” she recalls him saying. “Now I can’t imagine the story any other way.”

As she wrote, Gina Prince-Bythewood envisioned a real singer in the role of Noni. However her perspective changed when reality hit. “Nothing clicked” as she started auditioning people, singers primarily with a sprinkling of actors. After re-watching Walk the Line and Coal Miner’s Daughter, her thinking evolved. “The role of Noni calls for singing but there’s so much depth to the performance. I realized it was more important to have someone who had the chops to go there.” Auditions continued but none of the actors matched the image Prince-Bythewood had in mind, until Gugu Mbatha-Raw appeared. Nate Parker, who has been on the filmmakers’ radar since appearing in The Secret Life of Bees, was interested in playing the socially-minded cop and aspiring politician. Parker found it easy to connect with his co-star.

Beyond the Lights was primarily shot on location in L.A. Kaz and Noni’s idyllic escape to the beaches of Mexico was shot on location in Malibu. The filmmakers were also able to call on friends to make cameo appearances during their version of the BET Awards. “CEO of BET, Debra Lee agreed to do a cameo. We wanted cameos that would speak to the authenticity of the film so having her agree was fantastic.” R & B legend Chaka Khan and rapper Big Sean also appeared as themselves in the film