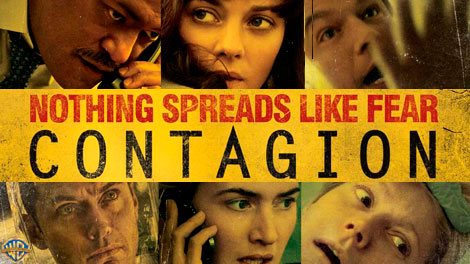 Contagion is an American thriller film centered on the threat posed by a deadly disease and an international team of doctors contracted by the CDC to deal with the outbreak. The film is directed by Steven Soderbergh, and written by Scott Z. 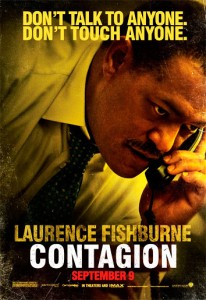 Contagion follows the rapid progress of a lethal airborne virus that kills within days.

The movie stars Marion Cotillard, Matt Damon, Laurence Fishburne, Jude Law, Gwyneth Paltrow, and Kate Winslet. The project was announced in February 2010 with the news that Matt Damon and Jude Law were cast in Contagion in their first collaboration since The Talented Mr. Ripley in 1999. Kate Winslet and Marion Cotillard joined the cast later in the month. Sodebergh received cooperation from the Centers for Disease Control and Prevention and also worked with a group of scientific advisers for the film. With a production budget of $60 million, filming began on September 25, 2010 and was initially scheduled to last until January 11, 2011.

An international traveler reaches into the snack bowl at an airport bar before passing her credit card to a waiter. A business meeting begins with a round of handshakes. A man coughs on a crowded bus… One contact. One instant. And a lethal virus is transmitted. When Beth Emhoff (Gwyneth Paltrow) returns to Minneapolis from business in Hong Kong, what she thought was jet lag takes a virulent turn. Two days later, she’s dead in the ER and the doctors tell her shocked and grieving husband (Matt Damon) they have no idea why.

Soon, others exhibit the same mysterious symptoms: hacking coughs and fever, followed by seizure, brain hemorrhage…and ultimately, death. In Minneapolis, Chicago, London, Paris, Tokyo and Hong Kong, the numbers quickly multiply: one case becomes four, then sixteen, then hundreds, thousands, as the contagion sweeps across all borders, fueled by the countless human interactions that make up the course of an average day.

At the U.S. Centers for Disease Control and Prevention, researchers mobilize to break the code of a unique biological pathogen as it continues to mutate. Deputy Director Cheever (Laurence Fishburne) tries to allay the growing panic despite his own personal concerns, and must send a brave young doctor (Kate Winslet) into harm’s way. At the same time, amid a rising tide of suspicion over a potential vaccine—and who gets it first—Dr. Leonora Orantes (Marion Cotillard) of the World Health Organization works through the network of connections that could lead back to the source of what they’re dealing with.

As the death toll escalates and people struggle to protect themselves and their loved ones in a society breaking down, one activist blogger (Jude Law) claims the public isn’t getting the truth about what’s really going on, and sets off an epidemic of paranoia and fear as infectious as the virus itself.