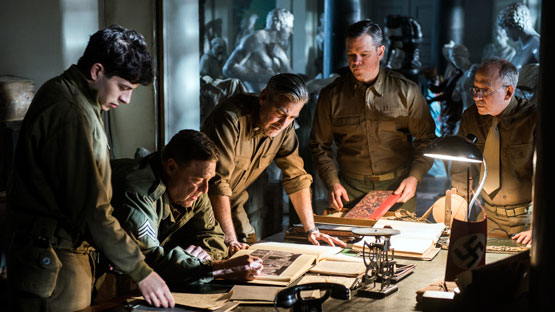 Based on the true story of the greatest treasure hunt in history, The Monuments Men is an action drama focusing on seven over-the-hill, out-of-shape museum directors, artists, architects, curators, and art historians who went to the front lines of WWII to rescue the world’s artistic masterpieces from Nazi thieves and return them to their rightful owners. 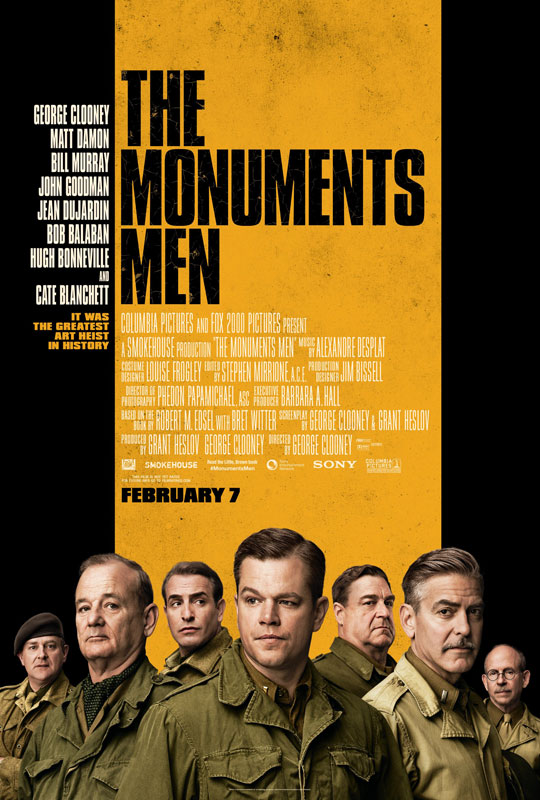 Though some filming was done in real mines, most of the tunnels were built on sound stages at Babelsberg Studios. “That’s a lot of stuff to shift around – paintings, crates, sculptures – and in order to get the scale you have to have large rooms that are accessible by one or two tunnels, fifteen hundred feet underground,” Production Designer Jim Bissell says.

“The story of the Monuments Men is one that really very few people know,” says George Clooney, who returns to the director’s chair for the story of a small group of artists, art historians, architects, and museum curators who would lead the rescue of 1000 years of civilization during World War II in his new film, The Monuments Men.  The chance to make a World War II movie was extremely attractive to Clooney and his writing and producing partner, Grant Heslov.

One might think it would be difficult to balance so many different huge stars in a single film – but Clooney says that it’s just the opposite.  “All of these guys are usually in movies where they have to carry the whole movie, but they’re all so comfortable with their own personas that they don’t need to own all the scenes they’re in,” he says.  “There was a huge generosity of spirit in all the actors – they were willing to come and play, because they were all enjoying each other’s company.”

George Clooney heads the cast in the role of Frank Stokes, a leading art historian. Matt Damon (James Granger) marks his sixth collaboration with George Clooney, but his first major role with Clooney in the director’s seat. The James Granger character is inspired by James Rorimer, who later became director of New York’s Metropolitan Museum of Art. Bill Murray was excited to join The Monuments Men from the minute George Clooney first told him about the project.  “It was about two years before we started shooting – and I went, ‘Oh God, that sounds so good. I’d really love to be in that movie,’” Murray says. Jonh Goodman’s character, Walter Garfield, is paired with Jean Claude Clermont, portrayed by Oscar®-winning actor Jean Dujardin, a re-teaming of Goodman and Dujardin from The Artist.

Behind the scenes, Clooney and Heslov reassembled a team of department heads who have collaborated on several of their films, including production designer Jim Bissell (who marks his fourth film with Clooney as director), editor Stephen Mirrione, A.C.E. (who has eleven collaborations with Clooney, including all five of Clooney’s feature films as a director), and costume designer Louise Frogley (who has collaborated with Clooney on eight films in total).

For The Monuments Men, three core locations were selected for filming: southern and southeastern England in the United Kingdom; the city of Berlin and the area in and around Babelsberg, Germany – including the 100-year-old Babelsberg Studios and the adjacent countryside in Potsdam – and the Harz Mountains, the highest mountain range in northern Germany.

However, there were dozens of sub-locations within those countries which had to double for a variety of spots on the globe – including Washington D.C., New York City, Chicago, Paris, Great Britain, Belgium, Germany, Austria and Italy – while representing a plethora of specific settings: churches, cathedrals, museums, castles, salt mines, hospitals, airfields, a military training base and field headquarters, country roads, offices and living quarters.