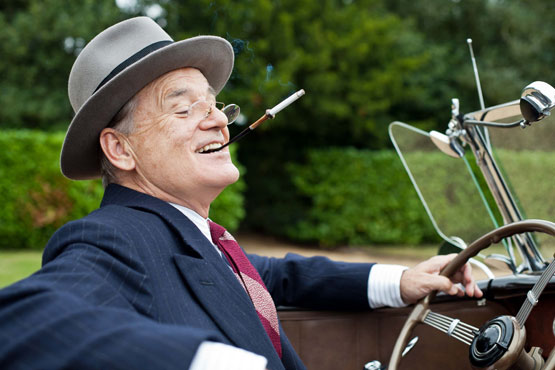 Academy Award nominees Bill Murray and Laura Linney star in a historical tale that uniquely explores the all-too-human side of one of history’s iconic leaders. Blending literate wit and drama, Hyde Park on Hudson is directed by Roger Michell from a screenplay by Richard Nelson. 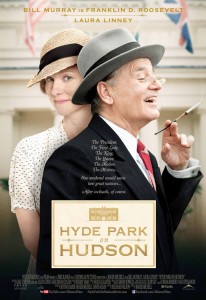 Prior to the start of filming the 1939-set Hyde Park on Hudson, director/producer Roger Michell immersed himself in research at the Library and Museum; stars Bill Murray and Laura Linney and screenwriter Richard Nelson spent time there as well, and toured all of the grounds and buildings.

In June 1939, President Franklin Delano Roosevelt (played by Mr. Murray) readies to host the King and Queen of England (Samuel West and Olivia Colman) for a weekend at the Roosevelt home at Hyde Park on Hudson, in upstate New York – marking the first-ever visit of a reigning British monarch to America. As Britain faces imminent war with Germany, the royals are desperately looking to FDR for U.S. support.

But international affairs must be juggled with the complexities of FDR’s domestic establishment, as his wife Eleanor (Olivia Williams), mother Sara (Elizabeth Wilson), and secretary Missy (Elizabeth Marvel) will all play a part in making the royal weekend an unforgettable one.

Words from the Director

By choosing to go against the immediate interests of his party, and against prevailing tides of isolationism or worse within his own electorate, FDR offered very real hope to England in what must have seemed at the time a hopeless situation. Many would have seen a kind of peace with Hitler as the only sensible way to avoid summary invasion.

The weekend at Hyde Park on Hudson, twelve weeks before the outbreak of the War and the subject of our film, becomes, in my mind, even more of an historical fulcrum: a moment where the smallest gesture has the greatest echo. Like catastrophe theory, which posits that a butterfly’s beating wings may generate by infinite degree of separation a mighty storm, so does a mouthful of hot dog (ironically a Frankfurter, no less) prefigure Omaha Beach and Victory in Europe.

Richard Nelson’s marvelous script delicately juxtaposes the public and the private, and the domestic and the epic. The sweep of great events and the persuasive power of great personalities vie for a hand at the tiller of history.

My father flew Lancasters over Berlin, was shot down, and was a POW. He is long dead. I put his copy of the Shirer diaries back on the shelf and feel the echoes of the King’s Top Cottage picnic still vibrating around me.