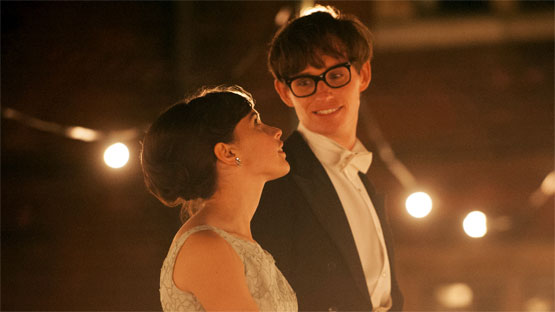 The Theory of Everything is the extraordinary and uplifting story of one of the world’s greatest living minds, the renowned astrophysicist Stephen Hawking, and of two people defying the steepest of odds through love. The film, based on the memoir Travelling to Infinity: My Life with Stephen, by Jane Hawking, is directed by Academy Award winner James Marsh (Man on Wire). 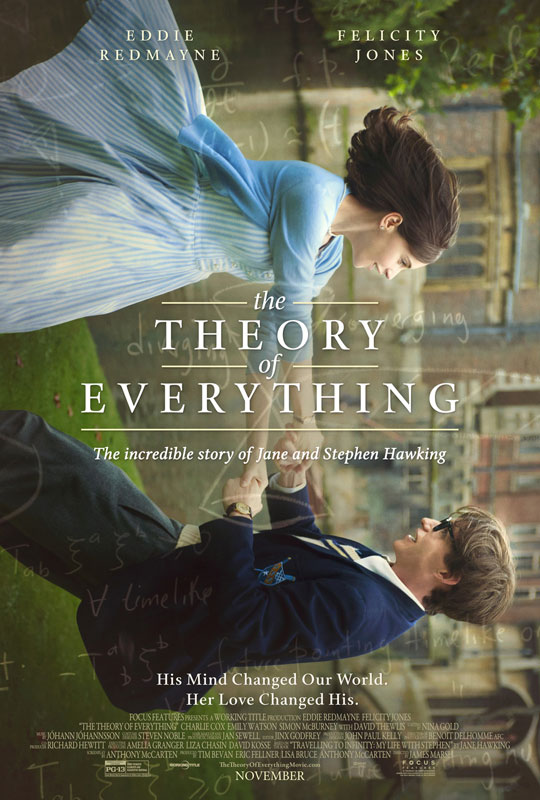 The challenge of the physical demands required to play Stephen Hawking loomed large. As Eddie Redmayne’s friend and fellow actor – and, soon, The Theory of Everything cast member – Charlie Cox said when Redmayne told him about the role, “You have no option but to give it 3,000%.”

Screenwriter and producer Anthony McCarten has long been fascinated by Professor Hawking, in particular the time and effort it took for the severely physically compromised man to write his seminal book. “He has illuminated physics for the world, and there is a sense of the profound in all his work,” says McCarten. McCarten was moved to read Jane Hawking’s memoir Travelling to Infinity: My Life with Stephen. He discovered “a marvelous love story between two people, incredibly intense and challenged in the extreme: first by the physical decline, and then by the advent of fame in their lives. When news of his imminent death proved exaggerated, and two years became 10, then 20, their situation demanded that their love take bold and unorthodox forms if it was to survive. Theirs was a love story without precedent.”

Envisioning the couple’s story as a feature film, he began writing a screenplay adaptation of the book with no guarantees in place; he met with Jane at her home to discuss the project. After multiple drafts, he was introduced to producer Lisa Bruce via their mutual ICM agent, Craig Bernstein. Knowing of Stephen Hawking only as the brilliant man in the motorized wheelchair who communicated via a mechanical voice-activated device, Bruce found the script to be a revelation. It would take McCarten and Bruce several years to secure the full legal rights, and the blessing and permission from Jane and Stephen, to allow this love story to become a movie.

Oscar-winning filmmaker James Marsh joined the project. The award-winning Working Title Films producers Tim Bevan and Eric Fellner, with whom Bruce had made the telefilm Mary and Martha, also came on board.

“For any actor, playing Stephen Hawking was going to be intimidating,” admits screenwriter and producer Anthony McCarten. Director James Marsh adds, “Whomever would play this part would have to do a lot of preparation. He would also have to convince as the Stephen only those close to the man knew, the shy university student.” Producers Tim Bevan and Eric Fellner had recently worked with one of England’s rising stars, Eddie Redmayne, on the smash Les Misérables, and the actor was already aware of McCarten’s script.

Accordingly, Redmayne parsed even the smallest details on the man he would be portraying. He notes, “Jane discusses in her book how Stephen had incredibly expressive eyebrows. That was something I spent months in front of a mirror working on.”  “When I met Stephen, I noticed how ‘yes’ is sort of a smile and ‘no’ is almost a grimace, yet they only manifest in a couple of the facial muscles for him, so I learned how to isolate those.” Redmayne obtained permission to visit MND patients both at a clinic and at home.

Director James Marsh notes that “Jane’s beats in the story are all emotional ones. I felt that Felicity Jones would match up well with Eddie Redmayne as actors, which she did, and as a director I found the collaboration with her to be exciting.”

As co-chairs of one of the world’s leading film production companies, producers Tim Bevan and Eric Fellner have made movies around the globe – and also closer to home. Accordingly, for the U.K. location shoot of The Theory of Everything, the filmmakers were granted considerable access to Cambridge, the town and campus where Jane and Stephen Hawking’s love story began; Cambridge was also where they made their home and family. The production’s shooting sites included St. John’s College; Stephen had actually attended Trinity Hall. Another key location was the Cavendish laboratory, where the atom was first split and where Stephen is entrusted with a key, as if being passed the task of discovering new breakthroughs.