Deep space. Six young hackers on a grueling work release program attempt to clear out – debug – the computer systems of a massive derelict freighter. They quickly fall prey to the ship’s vengeful artificial intelligence, a program that would kill to be human. 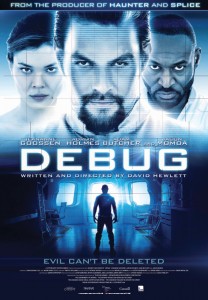 Jason Momoa and director/writer David Hewlett go back a few years, friends from when they worked together on “Stargate Atlantis.”

Debug is Hewlett’s homage to 2001: A Space Odyssey, a movie his father took him to for his 10th birthday party. “I was completely taken with the idea that the computer had turned on the humans. Everyone was so shocked that it would kill its creators. The result of this somewhat twisted train of thought is Debug,” Hewlett offered. “It’s a film where I’ve been able to have some fun exploring things from the computer’s perspective.”

To play out this scenario, Hewlett had to take humans out of their comfort zone and put them somewhere that a computer would have a justifiable right to exist in its own environment – in deep space and many years from now.

IAM, a warden program for the space prison fits right into Hewlett’s favourite brand of science fiction – the paranoid sort of 1970s, 1980’s technophobic kind of movies. IAM is not going to allow itself to be shut down nor is it going to allow these young offenders to leave because they are nothing more than a new shipment of inmates.

“Jason is a whole lot more than muscles,” says producer Steven Hoban, getting right to the point of how they fit the 6’3” actor into the confines of a computer role. “That’s one of the reasons he wanted to do this film.” “IAM is a character without a beginning, middle or end,” explains Jason Momoa. “IAM is limitless. He is so many different personalities, but no character arc. While IAM may be evil, the seeds of IAM’s personality are all human.”

The creative teams of producers Steven Hoban and Mark Smith of Copperheart Entertainment, and Hewlett and Jane Loughman of Monkeys & Parrots, all regard themselves as hardcore geeks – and to that end, they value VFX as much as anything else in a film. For Copperheart they had been jonesing for the tech opportunities in a science fiction project for a while, having worked their way through the werewolves of Wolves, the ghosts in Haunter, and the mutants in Splice.