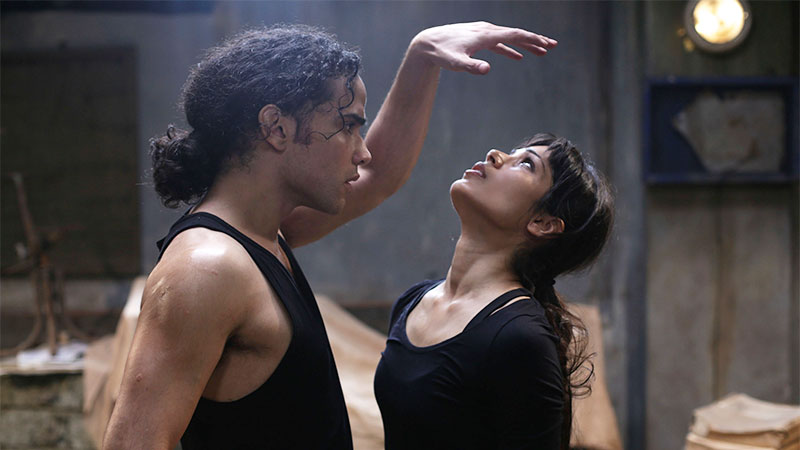 Desert Dancer follows the true, inspiring story of a brave Iranian dancer, Afshin Ghaffarian. Set in Tehran during the volatile climate of the 2009 presidential election and the start of the “Green Movement,” Afshin and a group of dancers (including “Elaheh” played by Freida Pinto) risk their lives and form an underground dance company. 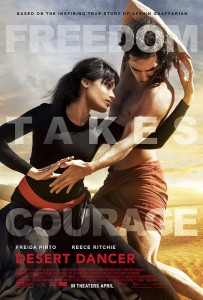 It took director Richard Raymond an extremely long time to raise enough money to make Desert Dancer due to the nature and subject matter of the film.

A few weeks after the premiere of Heartless director Richard Raymond read a news story about an Iranian dancer named Afshin Ghaffarian who was arrested after putting on a performance in the desert. “I had no prior connection to dance, and I never in a million years thought it would be the subject of my first feature but I found it to be absolutely fascinating as an artist and a filmmaker.” said Raymond

It took many months to convince Afshin to share his story, until finally Raymond and writer Jon Croker flew to meet him in Paris. They spent eight hours listening and recording Ghaffarian’s incredible story of resistance and resilience. This interview became the framework for their screenplay.

As he prepared to undertake his first feature film, Raymond had to convince financiers that he was the right person to helm the project. So the young director decided to film a promo piece with portions of a “desert dance” scene in the Wadi Rum desert in Jordan, with Ghaffarian playing himself.

The Jordanian authorities had other ideas. Afshin wasn’t allowed to be in the country. When Raymond inquired why, the authorities explained that because he was a male dancer, he must also be a homosexual.

Fortunately, Raymond had an idea. He had recently seen The Lovely Bones and been impressed with Reece Ritchie in a small role. Beyond being a tremendous actor, Ritchie has significant martial arts training so Raymond knew he could handle the strenuous dance sequences. Ritchie had additional qualities that did not go unnoticed. The physical likeness he had to Afshin was uncanny. The actor called his agent and said “I’m playing this part, come hell or high water.” Reece got on the next plane to Jordan, and almost immediately found himself dancing in the desert.

He was particularly sensitive to the challenge of casting “Elaheh,” a trained dancer who helped Ghaffarian and his friends refine their dance skills. “Elaheh,” is also the woman Ghaffarian loved and had to leave when he escaped Iran.

After honing the script, Raymond sent it to Hylda Queally’s office (Freida Pinto’s agent) for Freida and the Slumdog Millionaire actress immediately responded to it. In trying to secure Pinto for the role, Raymond was very mindful of being “a first-time director with no credentials” but felt confident that he had a great story.

On first reading of the script, Pinto recalled, “Elaheh’s character literally popped off the page. Not only was it a role I had never done before, I was also inspired to portray the voice of repressed youth who don’t have any hope.”

There were no body doubles in Desert Dancer. Pinto trained for a year and Raymond waited for the financing. There was a moment where Raymond thought he may have to use a body-double to film the more challenging sequences. But as they readied a complicated scene something shined through in Freida during her dance. Raymond realized Pinto was more than capable of performing the sequences herself and did not need a double.