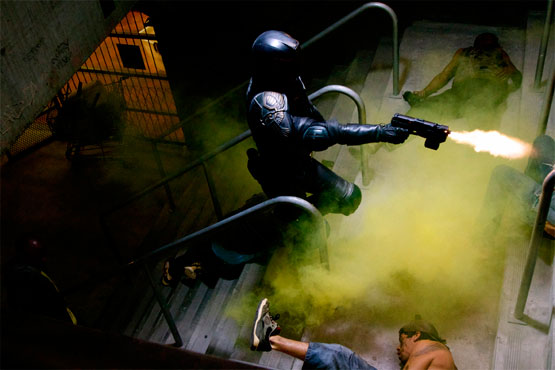 Dredd 3D is a British science fiction action film directed by Pete Travis. It was announced in December 2008 that the production company DNA Films was to make a film adaptation of 2000 AD comic book character Judge Dredd  and would be unrelated to the 1995 film version. The cast consists of Karl Urban as Judge Dredd and Olivia Thirlby as Judge Anderson. 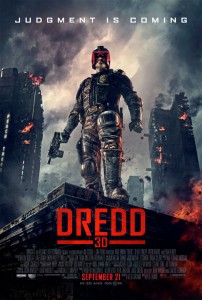 Alex Garland revealed that there are plans for a trilogy of Dredd films.

The future world is an irradiated waste land. Somewhere, off an eastern coast, lies Mega City One – a vast, violent metropolis where criminals rule the chaotic streets. The only force of order lies with the urban police force known simply as the “Judges” who possess the combined powers of judge, jury, and instant executioner. Known and feared throughout the city, Dredd (Karl Urban) is the ultimate Judge, challenged with ridding the city of its latest scourge – a dangerous drug epidemic that has users of “Slo-Mo” experiencing reality at a fraction of its normal speed.

In May 2010, Reliance BIG Entertainment announced they would finance the film (with a budget of $45 million), which will be shot in 3-D, with Pete Travis hired to direct. Script writer Garland along with Andrew MacDonald and Allon Reich were also confirmed as producers for the film with filming to begin in the fourth quarter of 2010 in Johannesburg, South Africa. John Wagner also spoke positively on the film’s script stating:

“Alex Garland’s script is faithful to the original concept that made Judge Dredd a favourite bad-ass hero. It’s a high-octane slay  ride through the dark underbelly of the vast future city. A fan pleaser.“

In July, IM Global (production partners on the film) stated that the film’s official title would be Dredd instead of Judge Dredd. Karl Urban was cast as Dredd the same month.

Filming began on 12 November 2010 in Cape Town, South Africa. The first photos from the set were revealed on 19 November.

The cinematographer Anthony Dod Mantle said they had to build new camera rigs to get some of the shots they wanted. He also suggested that the film “won’t look so much like the action films we’re accustomed to, and the audience won’t have things thrust in their faces every five minutes. I hope it will be more painterly. If we get it right, it will be a cross between Blade Runner and Clockwork Orange.“