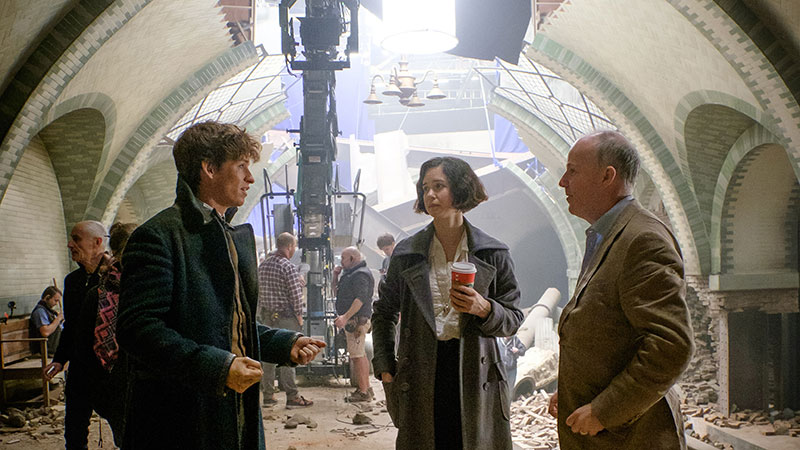 There are growing dangers in the wizarding world of 1926 New York. Something mysterious is leaving a path of destruction in the streets, threatening to expose the wizarding community to the No-Majs (American for Muggles), including the Second Salemers, a fanatical faction bent on eradicating them. And the powerful, dark wizard Gellert Grindelwald, after wreaking havoc in Europe, has slipped away…and is now nowhere to be found. 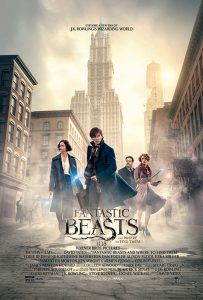 Eager to receive any insights Rowling could provide, all the actors loved when she paid them a visit during production. Redmayne recounts, “The best days were when Jo came on set because she has such total knowledge of this complex world and such a full take on the characters. She could give us the back stories and even where she sees Newt and the others going in the future. For an actor, that’s the dream—to have the actual inspiration and imagination of the creator of this world to guide me through was invaluable.”

The film marks the screenwriting debut of J.K. Rowling, whose seven beloved Harry Potter books were adapted into the top-grossing film franchise of all time. Her script was inspired by the Hogwarts textbook Fantastic Beasts and Where to Find Them, written by her character Newt Scamander.

Having helmed the final four installments of the ‘Potter’ franchise, Yates says his return to the cinematic wizarding world was “like coming home. It was lovely to step back into the place I’d spent six wonderful years.”

J.K. Rowling, who made her screenwriting debut on the film and also served as a producer, recalls that she initially brought the primer into being as a project for charity. “During the writing of that book,” she says, “I became interested in its ostensible author, Newt Scamander, and he took on quite a bit of life for me. So I was very enthusiastic when the studio came to me and said they wanted to make it into a movie because I already had the back story in my mind and it just so happened that they’d optioned the very thing I was most interested in. And I knew if it were to happen, I would have to write it because I know too much about Newt to let someone else do it.”

Found within the tale are other, albeit more subtle, links to J.K. Rowling’s previous works. Producer David Heyman, who also produced all eight of the “Harry Potter” films, confirms that amidst the magic and fun, are concepts that have become hallmarks of her writing. “Many of the underlying themes of the Potter books are in evidence here: the virtue of tolerance in contrast to the dangers of intolerance and repression; being true to who you are; outsiders coming together and connecting…”

Eddie Redmayne, who stars in the central role of Newt Scamander, relates, “A theme at the core of this film is the fear of things we don’t understand and also how people react to that fear by taking extremes.”

Behind the camera, a number of other “Potter” alumni were reunited on “Fantastic Beasts,” including production designer Stuart Craig. Over the course of eight films, Craig had realized Rowling’s vision of the wizarding world, perhaps most notably the Hogwarts Castle, whose silhouette has become as recognizable as the characters who inhabited it. For this film, Craig created another wizarding world institution—the headquarters of MACUSA (Magical Congress of the United States of America).

The casting of “Fantastic Beasts” began with the character of Newt Scamander, whose visit to New York becomes far more eventful than he ever imagined. Heyman says that Eddie Redmayne was the filmmakers’ first and only choice for the part. “He is quintessentially British, and an actor for all times who can play a character from any time.”

Yates reveals that finding the chemistry began in the audition process. “We started with Eddie as Newt and then built the world around him. It was a bit like putting a band together,” the director laughs. “Eddie flew to New York with us and we auditioned lots of Tinas and Jacobs and Queenies with him in a room. Over a 48-hour period, he did the same scenes over and over again with different people, and out of that process we found our core cast—four actors who all bring something different to the movie in interesting ways that complement one another.”

Redmayne says the results were worth it. “The film revolves around this quartet of people who start out moving in completely opposite directions and end up cohered as friends. It was wonderful getting to work with three such brilliant actors as Katherine, Alison and Dan.”

As the title suggests, there is another ensemble of characters who play a vital role in the story: the collection of magical animals that Newt has rescued during his global expedition. The beasts were designed and then given depth, dimension, color, light, movement and individual personalities via CGI. The complicated process involved a close collaboration between David Yates, J.K. Rowling, visual effects supervisors Tim Burke and Christian Manz and their team, and the VFX computer animation development department, led by Pablo Grillo, among others.

Manz recalls, “The main challenge was to create animals that you believe could live in the animal kingdom of the wizarding world.” Part of the task of instilling that belief fell to the actors, primarily Eddie Redmayne, who shares the most amount of screen time with the animals and had to convey Newt Scamander’s abiding love and compassion for his menagerie. In preparing for that aspect of his role, Redmayne spent time with real-life animal handlers, studying how they related to the beings in their care. He details, “I met with zoologists and people who track animals to observe them in the wild, and they all talked passionately about feeling at one with the environment and celebrating nature. I did quite a bit of work on the extraordinary relationships between humans and animals and it lent a lot of physical and emotional elements to my performance.”

To help the actors perform opposite beasts that weren’t actually there, the filmmakers often utilized puppeteers “to give the actors something real to interact with, something they could touch, which reacted to their performance in the moment,” says supervising creature puppeteer Robin Guiver.

In bringing the beasts to life, Grillo says that they sought input from the person whose imagination had spawned the entire project. “Over the course of the production, J.K. Rowling would come in to see how the creatures were going and her approval was obviously very important to us. On some occasions, she would say, ‘No that’s not right. Newt wouldn’t have that in his case because it’s a domesticated creature; Newt’s special interest is more rare and vulnerable species.’ She obviously knows this world intimately, so that kind of feedback was invaluable.”

The final artistic element in “Fantastic Beasts and Where to Find Them” is the score, composed by James Newton Howard. “This is the kind of movie that’s every composer’s dream,” he states. “The scope of the film is very broad—there are beautiful, magical moments and also some dark, scary moments, so it required complex themes that are able to move between them, while, more than anything else, helping to tell the story.”