Frankie and Alice is a Canadian drama film directed by Geoffrey Sax. It stars Halle Berry in the main role. Filming began in Vancouver, British Columbia, in November 2008 and ended in January 2009. 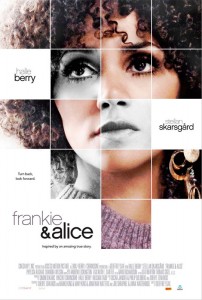 Frankie & Alice is a drama centered on a young woman with multiple personality disorder who struggles to remain her true self and not give in to her racist alter-personality.

A true story about a popular black go-go dancer/stripper in the ’70s who suffers from dissociative identity disorder. While Frankie is a black woman, she has two alters that live within her psyche: Genius, a seven-year-old child, and Alice, a Southern white racist woman, with whom Frankie struggles the most to overcome.

Her disorder occurred as a result of a traumatic accident in which she lost the man she loved in a car accident and soon after the child they had conceived. With the help of her psychiatrist she receives the help she needs and becomes a high school teacher who later goes on to marry a psychiatrist.

Following a screening at the Cannes Film Festival, The Hollywood Reporter described the film as “a well-wrought psychological drama that delves into the dark side of one woman’s psyche“. The review also said Halle Berry was “spellbinding” as Frankie, with “rock-solid” supporting performances.