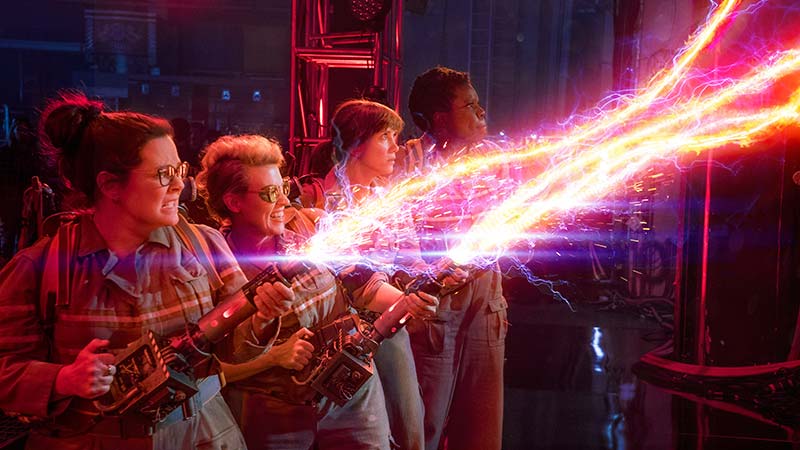 Erin Gilbert (Kristen Wiig) and Abby Yates (Melissa McCarthy) are a pair of unheralded authors who write a book positing that ghosts are real. A few years later, Gilbert lands a prestigious teaching position at Columbia University, but her book resurfaces and she is laughed out of academia. When ghosts invade Manhattan, Gilbert reunites with Yates, teaming up with a nuclear engineer, Jillian Holtzmann (Kate McKinnon), and a subway worker, Patty Tolan (Leslie Jones), to save the world from a mysterious evil and powerful demon known as Rowan (Neil Casey) who can exercise control over human forms 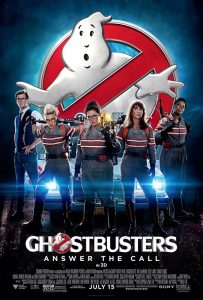 One of the stunts that Melissa McCarthy, who re-teams with director Paul Feig for the fourth time in Ghostbusters, was able to perform herself was crowd surfing at a rock concert.

The new film began with director Paul Feig, who, as the creator of “Freaks and Geeks” and the director of Bridesmaids, The Heat, and Spy, has built an impressive comedy resume of some of recent years’ most successful, groundbreaking, and memorable comedies. Given the opportunity to reboot the franchise, it was Feig who saw a way to bring one of his personal comedy influences into the 21st century. “I was an enormous fan when Ghostbusters first came out,” he says.

Naturally, the idea for another Ghostbusters – as a sequel – was one that had been explored for quite a while.  “I’ve always wanted to do another sequel,” says Ivan Reitman, who directed and produced the first two iconic films in the franchise, and now produces the new film with Amy Pascal.

With the passing of Harold Ramis in 2014, the studio and Reitman began to look for a new comedic talent to take the helm of a future film.  That’s when Feig entered the picture.  “I knew they’d been trying to put together a sequel for a long time,” says Feig.  “I started wracking my brain.  Funny people fighting the paranormal is still the greatest idea ever, and it felt like there was still so much to explore outside the worlds of the first two films.  I thought, ‘How would I do it?’  Well, I’d make it with the four funniest women I know.  That excites me, because it makes it something new.”

With the studio and Reitman in his corner, Feig teamed with Katie Dippold to co-write the screenplay.  “There was only one person I wanted to write this with, and that was Katie,” says Feig of his co-writer on The Heat.

“At first, we spent a lot of time talking about what we wanted the script to be,” says Dippold.  “There were so many different creative debates – what elements of the original do you want to see again?  What should feel new?  Then we talked about the story and the characters.  Nobody wanted to do remakes of the original characters – Venkman will always be Venkman.  So we came up with four new characters of our own.”

But writing the characters as complementary was only half of the challenge – Feig also had to cast the roles with actors who were hilarious and could bring them to life.Into these roles, Feig cast Melissa McCarthy as Abby, Kristen Wiig as Erin, Kate McKinnon as Holtzmann, and Leslie Jones as Patty.

One reason why these four actresses were right for the roles was that beyond their individual talents, Feig knew they would blend well as a team, creating a whole that was even stronger than its individual components.“That’s why it was important to me to cast actors who were friends in real life, because when you do that, you get a level of camaraderie, realness, and warmth between them that you don’t sometimes get when you put actors together who don’t know each other,”

It wouldn’t be a Ghostbusters movie without the Ecto-1, so naturally, the Ghostbusters’ ride is in the film.  But, just as the original film’s weapons were updated, so too was the car.  The original 1984 film used a retrofitted 1959 Cadillac ambulance, and for the new film, the filmmakers chose a similarly dated car.  “We found a 1981-83 Cadillac hearse,” says Feig.  “We wanted to keep the fun of the original Ecto-1, but make it our own.  Once we had the car, Jefferson Sage and his team made this car really cool – I liked the idea of having a red roof on the Ecto-1.  The story is that the car comes from Patty’s uncle, so we decided he wanted people to go out of this life in style and that’s why it has a red roof. I love the way it looks.” This Ghostbusters film also introduces a new vehicle – Kevin’s motorcycle, the Ecto-2.

In the film is Aldridge Mansion, the supposedly (and, it turns out, actually) haunted mansion.  With the exterior filmed at the Boston University Castle, a prominent house near the campus, and the interior shot at the Ames Mansion, an estate now owned and run by the State of Massachusetts as a park, Sage who was responsible for the overall look of the film, including the sets and locations, says the location formed a fun backdrop for the Ghostbusters to make their first encounter with the beyond.  “The BU Castle a Tudor revival mansion built around 1915, and the Ames Mansion was built in the 1920s.  They gave us a great sense of the ghost story that would kick the movie into high gear.  We were able to push this design into the familiar world of a Gothic ghost story,” he says.

One of Boston’s more prominent landmarks, the Wang Theatre, becomes the space for a rock concert where the Ghostbusters face their first real battle with a being from another world.

The film’s epic battle takes place in Times Square, and to film it, the filmmakers found the perfect location… in South Weymouth, Massachusetts.To create the set, the filmmakers would need a large area, and found it in an abandoned Naval Air Station.  First established as a regular Navy blimp base in World War II, the location was an operational US Navy airfield from 1942 until 1997.