Gnomeo and Juliet is a CGI animated film produced by Starz Animation released under the Touchstone banner that is based on William Shakespeare’s play Romeo and Juliet. This film’s two main characters are voiced by James McAvoy and Emily Blunt. Several songs within the film are performed by Elton John, including one with Lady Gaga. Gnomeo and Juliet is directed by Kelly Asbury. According to Box Office Mojo, the film is rated G by the MPAA, being Touchstone Pictures’ first ever G-rated film as well as its first family film since The Nightmare Before Christmas. 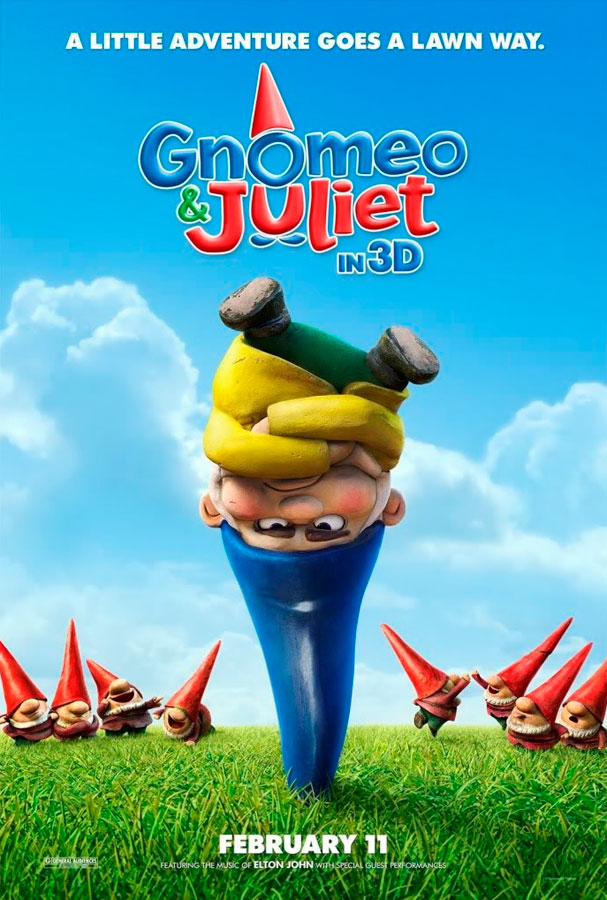 Based on William Shakespeare’s play, Romeo and Juliet, Gnomeo & Juliet features two garden gnomes in forbidden love. The couple looks to find lasting happiness and avoid tragedy as they are caught in the middle of a feud between the blue and red garden gnomes.

The film was the original idea of Rob Sprackling and John Smith who sold the spec script to Disney through Rocket Pictures. Initially, the film was going to be produced by Walt Disney Feature Animation, but was shut down by its new chief, John Lasseter, after the Pixar acquisition. Miramax Films picked up the project and guided its production until the division closed down. Australian director Adam Elliot was approached and asked to direct the film, but he rejected the offer due the film’s incompatibility with his style, as well as his lack of experience with CGI. The film will now be produced by Starz Animation in Toronto, released under the Touchstone Pictures banner and will be Touchstone’s first animated film since 1993’s The Nightmare Before Christmas.

The film will be distributed in the UK and Canada by E1 Entertainment, and the film will be released in 3D. Elton John and Director Kelly Asbury presented 10 minutes of the film at the Cannes Film Festival. The film’s final screenplay was written by Kevin Cecil, Andy Riley, Mark Burton, Emily Cook, Kathy Greenberg, Steve Hamilton Shaw and Kelly Asbury.

Starz Animation Toronto (“9”) produced all of the animation for the film, including the stereoscopic version.

The soundtrack for the movie features music by Elton John, Lady Gaga, Nelly Furtado, Kiki Dee, and selections from the score composed by James Newton Howard. The soundtrack was supposed to feature a much anticipated duet between Elton John and Lady Gaga titled “Hello, Hello”; however, it has been confirmed that that version of the song will only appear in theaters and not on the soundtrack.