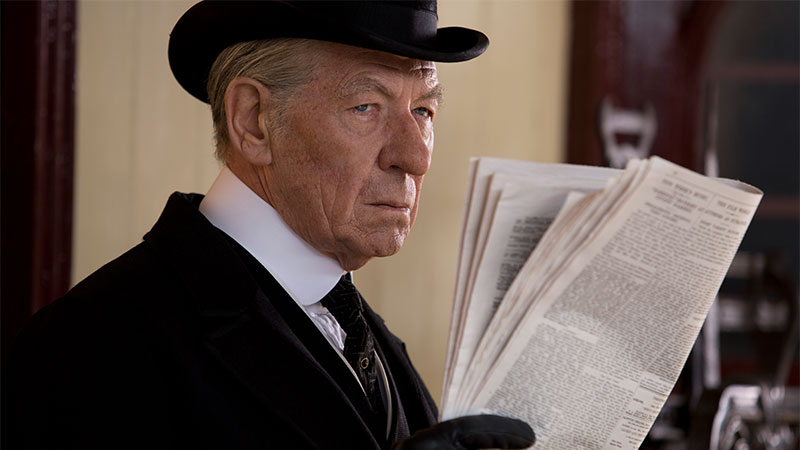 Based on the novel A Slight Trick of the Mind by Mitch Cullin, Mr. Holmes reimagines Sherlock Holmes as a real person whose adventures have been turned into best-selling novels by his friend and partner Dr John Watson. Now old and in failing health, the famously rational detective is forced to engage for the first time with his emotions as his mental powers dwindle. 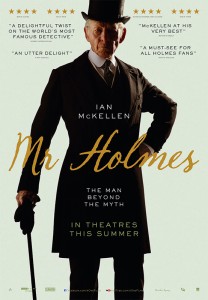 Indeed, one of the key elements that made MR HOLMES such a pleasure for Bill Condon was the opportunity of reuniting with Ian McKellen after the success of Gods and Monsters.

It was the theme of ageing that appealed to director Bill Condon when he was approached by producer Anne Carey to board the film. Says the director: “I thought Jeffrey Hatcher’s screenplay was incredibly dense, rich and poetic.”

The experience of working with Condon was one that Hatcher, like the other members of the creative team, recalls with fondness. “Bill is a wonderful collaborator,” says the writer. “You know perfectly well, as a writer/director, he could write script changes himself but he has a great respect for the script and it’s organic nature and he’s one of those people who makes all the people he works with think his best ideas are their ideas.”

Playing alongside McKellen is Laura Linney in the role of housekeeper Mrs Munro and newcomer Milo Parker as her teenage son, Roger. Linney has long been a fan of Holmes. “ I fell in love with Sherlock Holmes and the whole world of Sherlock at eleven or twelve with the Basil Rathbone movies,” she says.

The third character in the triangle is Roger, Mrs Munro’s 10-year-old son who soon becomes Holmes’s invaluable helper much to his mother’s concern. Finding a young actor to play Roger was the toughest challenge Condon faced. Playing alongside the British cast is Japanese star Hiroyuki Sanada, perhaps best known to cinema audiences for his action roles but whose turn in “King Lear” at the Royal Shakespeare Company in 1999 and 2000 earned him an honorary MBE.

Finding the locations proved very tricky for the team, partly because Bill Condon was keen to imbue the film with the feel of an investigator tracking a villain, as Holmes unravels the knotty mystery at the film’s heart, and partly because the team wanted to use locations that were unfamiliar to cinema audiences. Thus, locations to be used in London were key and after a search spanning several months, the team found a farm just outside Rye near the Sussex coast to stand in for the principal location of Holmes’s house.

The filmmakers took that homage even further in including a scene where Holmes goes to see a film based on the Watson books in the cinema. The film he watches, Sherlock Holmes and The Lady in Grey, has characters that we have met in the film, for example, the very theatrical Madame Schirmer who is played in the film by Frances de la Tour and in the film-within-the film by Frances Barber who was more than able to give an already larger-than-life character even more Hollywood melodrama. In a playful nod to Young Sherlock Holmes, Condon cast its star Nicholas Rowe as the actor playing Holmes in the film-within-the film.

The final element of the production was the score. Condon’s long-time collaborator Carter Burwell came on board as composer. His skill, according to Condon, is his emotional empathy.