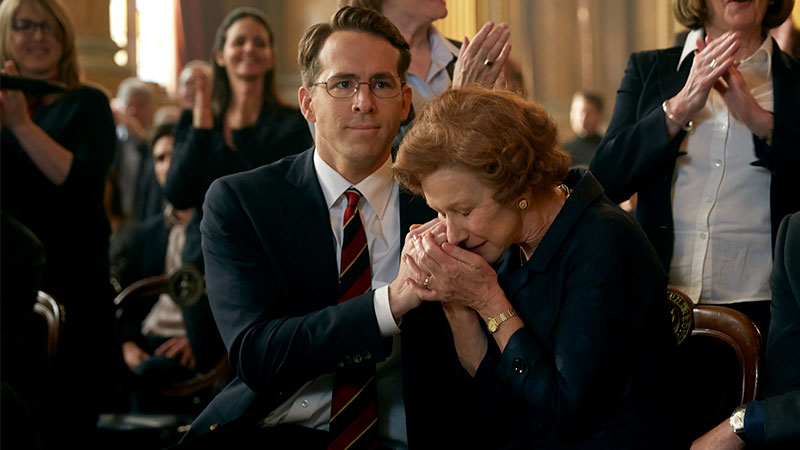 Woman in Gold is the remarkable true story of one woman’s journey to reclaim her heritage and seek justice for what happened to her family. Sixty years after she fled Vienna during World War II, an elderly Jewish woman, Maria Altmann (Helen Mirren), starts her journey to retrieve family possessions seized by the Nazis. Together with her inexperienced but plucky young lawyer Randy Schoenberg (Ryan Reynolds), she embarks upon a major battle which takes them all the way to the heart of the Austrian establishment and the U.S. Supreme Court. 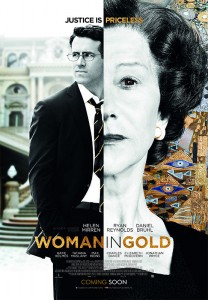 In producer David M. Thompson’s opinion, he has never taken a script to market with as much heat attached to it as WOMAN IN GOLD had. Several companies entered the bidding fray, but Thompson and head of BBC Films Christine Langan chose to partner on the film with the Weinstein Company.

For director Simon Curtis, his introduction to the story of Maria Altmann came through watching a program made for the BBC’s Imagine documentary series. Presented by his friend Alan Yentob and entitled “Stealing Klimt,” it recounted the tale of the painting, Altmann’s family and her battle to reclaim the paintings.

For many reasons, Curtis found himself deeply affected by Maria Altmann’s story and pitched it as a potential feature to Christine Langan, Head of BBC Films. “It spoke to so many things that interest me in the way that it bolted the Second World War and the Holocaust to contemporary America,” says Curtis. Langan was won over by Curtis’ enthusiasm for the story and asked David M. Thompson, who founded and ran BBC Films for many years, to come on board as the project’s producer.

To craft the screenplay, the team recruited award-winning playwright Alexi Kaye Campbell, whose debut play, “The Pride,” had been produced for the Royal Court Theatre. Woman in Gold would be his inaugural foray into writing for the big screen, but Curtis and Thompson were impressed by his smart, economical style and facility for juggling narrative strands in different time periods.

While some directors might have settled for actors speaking accented English in the sequences set in pre-war Vienna, Curtis was adamant that German be spoken in the historical flashbacks. “The film is about identity and asks the question, ‘Are you where you’re from, or where you are?’” notes the director.

To portray the indomitable, headstrong and feisty Maria Altmann, Helen Mirren was Curtis’ first and only choice. “Although I knew Helen, I’d never directed her,” he says. With Mirren on board as Maria, it was executive producer Harvey Weinstein who first suggested Ryan Reynolds for the role of Randy Schoenberg. The odd-couple dimension to Woman in Gold’s central relationship made everyone realize that Weinstein’s suggestion was an inspired one, with Reynolds’ natural wit and charm delivering an audience-friendly boost to the character. “Harvey called me and said, ‘Hey Reynolds, it’s your lucky day,’” recalls the actor.

To prepare for the role of a Mittel-European grande dame who spent the majority of her years on American soil, the Oscar and BAFTA-winning actress initially turned to a doctor friend in Los Angeles who knew Altmann’s story and said Maria was exactly like his own mother. He interviewed his mother about her life on camera, offering Mirren a window into the well-educated Jewish- Viennese heritage she would be bringing to life on screen.

Portraying another Austrian who was instrumental in helping Altmann win her case is celebrated German actor Daniel Brühl, who takes the role of campaigning journalist Hubertus Czernin. At Brühl’s suggestion, the production hired Austrian actress Susi Stach to serve as the dialect coach. Brühl had worked with Stach on Ron Howard’s RUSH to perfect the Austrian accent he needed for his acclaimed performance as Formula 1 champion Niki Lauda.

Principal photography for Woman in Gold began on May 23, 2014, and took eight weeks to complete, with the production splitting its time between three cities. First up was London. Although the UK capital does not feature in the story, London’s architecture stood in for many of the story’s grand interiors. Locations included Goldsmith’s Hall in the City of London and Wandsworth Town Hall, deployed, respectively, for the final arbitration hearing in Vienna and the Austrian Ministry of Culture. The interior of Schoenberg’s LA law offices were in Hemel Hempstead, while his family home, Altmann’s LA bungalow and the Bloch-Bauer’s opulent apartment in 1938 Vienna were constructed at Twickenham Studios.

The production spent five days at the end to capture the Los Angeles exteriors throughout the film. The resonance of the entire story meant that, for Curtis and everyone involved, shooting in Vienna held special meaning. “The Vienna shoot was without doubt the most wonderful, most emotional working experience I’ve ever had,” he states. “We were recreating the end of the Jewish community in Vienna. It was very powerful.”