It has been called one of the greatest sports stories ever told – but the tale of coaching legend Bob Ladouceur and his team’s incredible run of high school football victories, known as “the streak,” is about far more than the thrill of sports. Inspired by the true story, When the Game Stands Tall comes to the screen as a heart-stirring drama starring Jim Caviezel as Bob Ladouceur, Golden Globe® winner Laura Dern as Bev Ladouceur, Michael Chiklis, Alexander Ludwig, and a cast of exciting newcomers as the legendary young Spartans. 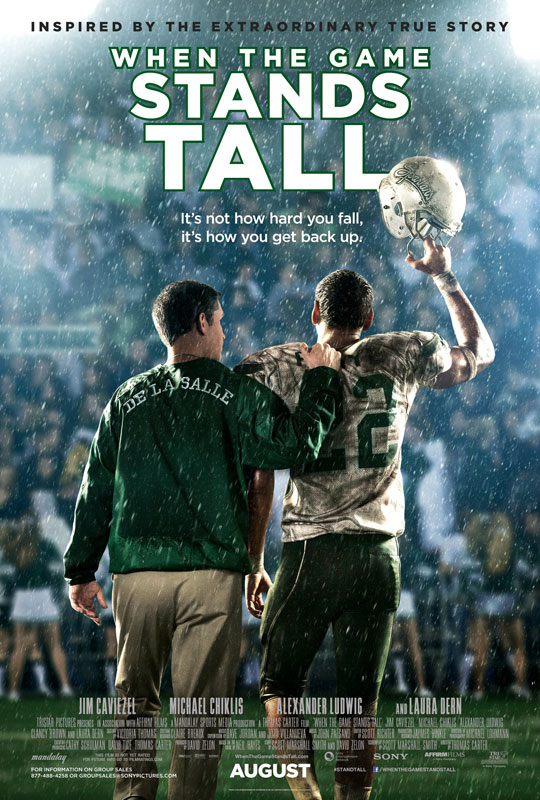 The film even had the support of a former De La Salle player himself, Maurice Jones Drew, who has a cameo in the film.

Like all the greatest sports stories, the true-life tale of the man known as “Coach Lad” and his De La Salle Spartans was about reaching for the limits of human achievement. That’s what drew producer David Zelon, who previously produced the rousing comeback tale Soul Surfer, to the story. He came across it quite unexpectedly, while cleaning out the equipment room at his football player son’s high school, where he spied an abandoned copy of Neil Hayes’ book about Ladouceur, also titled When the Game Stands Tall. Intrigued, Zelon read a few pages. Thirty pages in, the producer was ready to hunt down the film rights no matter what it would take.

Screenwriter Scott Marshall Smith came on board to streamline the story with Zelon into a taut cinematic experience, mixing sports suspense with the stories of uplifting lives that have defined Coach Lad as a man. When it came to choosing a director, Zelon already had one in mind: Thomas Carter, whose films include the musical drama Swing Kids, the dance-themed romantic drama Save the Last Dance and Coach Carter, the inspiring story of an inner-city basketball team.

To bring all that to life, the filmmakers approached an actor who already possessed some of those same characteristics: Jim Caviezel, perhaps best known for his portrayal of Jesus in Mel Gibson’s The Passion of the Christ. Caviezel not only had the personality and the acting credentials, he also hailed from an deeply athletic family, with a father who played basketball for John Wooden at UCLA. He himself once dreamed of an NBA career, before an injury halted it.

Immersing himself into the role, Caviezel was glad to have director Thomas Carter supporting him. “He’s someone who tells you things straight up,” Caviezel describes. “He has a toughness and a strength that this film required.”

When Coach Lad suffers the consequences with a near-fatal heart attack, it is his steadfast wife, Bev, who brings him back to what really counts. Taking the vital role is one of today’s most diverse actresses: Oscar®-nominated and three-time Golden Globe® Award-winning actress Laura Dern,

To do the Spartans full athletic justice, director Thomas Carter brought in Allan Graf, who is rapidly becoming a legend in sports movies.

The entirety of When the Game Stands Tall was shot over the course of 41 days in New Orleans, Louisiana. Not surprisingly, the shoot took place in several area high schools. With a strong local football culture, the cast and crew felt right at home. “Louisiana is a great place to shoot a movie,” sums up Zelon. “And it’s a great football state.”