Toy Story 3 is a 2010 American 3D computer-animated film. It is the third film in the Toy Story series.The film is produced by Pixar Animation Studios and released by Walt Disney Pictures. 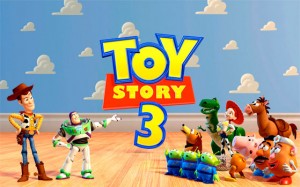 Toy Story 3 has received universal critical acclaim. Review aggregation website Rotten Tomatoes reports that 99% of critics have given the film a positive review based on 236 reviews, with an average score of 8.8/10. The critical consensus is: Deftly blending comedy, adventure, and honest emotion, Toy Story 3 is a rare second sequel that really works.

The role of Slinky was taken over by Blake Clark, while Ranft’s characters and various others were written out of the story (Wheezy was mentioned in the beginning). New characters include voice-overs by Ned Beatty, Timothy Dalton, Bonnie Hunt, Whoopi Goldberg, Jeff Garlin and Michael Keaton.

Toy Story 3 was released worldwide in June, July and August. The feature broke the record of Shrek the Third as the biggest single day North American gross for an animated film unadjusted for inflation and a big opening with an unadjusted gross of $110,307,189. It is also the highest-grossing opening weekend for a Pixar film, as well as the highest-grossing opening weekend for a film to have opened in the month of June.

Andy is 17 years old and has outgrown his old toys, some have been either sold or given away. The others have been stored in a box and are being stored away whilst Andy is at college. He decides to take Woody with him and packs the other toys in a garbage bag, intending to store them in the attic, but Ms. Davis mistakenly puts the bag out on the roadside as garbage. Believing that Andy no longer wants them, the toys sneak into a box to be donated to Sunnyside Daycare. Woody, who saw what really happened, tries to clear up the misunderstanding, but the others refuse to listen.

The toys are driven to Sunnyside where they receive a warm welcome from the daycare toys, led by Lots-O’-Huggin’ Bear (a.k.a. Lotso). Woody tries to convince the others to return to Andy, but they feel that they would be happier at Sunnyside, so they let him leave without them.

The others soon discover the children Lotso assigned them with are too young, and they are innocently abused and tortured. Meanwhile, Molly’s Barbie, who was also donated begins to fall for Ken, who is Lotso’s right hand man and is also falling for Barbie. Buzz goes to ask Lotso to transfer them to the older children, but is instead caught by some of the Sunnyside toys and reset to his original, deluded space ranger self.