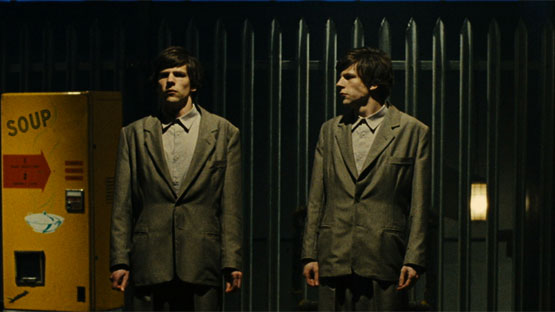 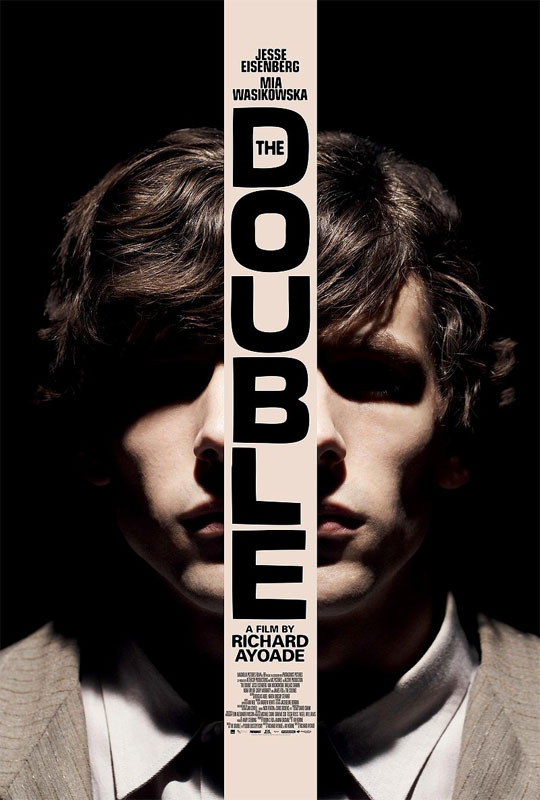 An additional trauma for Eisenberg, who never sees his own films, was having to watch parts of his own performance in order to piece together scenes in which both characters appeared.

In 2007, Robin C Fox and Amina Dasmal met Harmony’s brother, Avi Korine, who was working on a script adaptation of Fyodor Dostoevsky’s novella The Double. It struck the producers that this story of a solitary, troubled man whose life is upended by his over-confident alter-ego might appeal to another name on their creative wish-list – the British writer, director and performer Richard Ayoade, then yet to make his debut as a feature director.

Australian rising star Mia Wasikowska, who plays Hannah, was interested in Ayoade having seen his feature debut Submarine, which she describes as “brilliant”. Her interest in his second directorial outing was further stimulated by her friendship with Harmony Korine, who encouraged her to look out for his brother’s script when it came her way.

The Double presented Eisenberg with a challenge: that of playing two characters in one film. “I thought it was a really interesting acting opportunity,” he says. “Richard’s goal was not to create a traditional comic dichotomy between ‘good’ and ‘bad’ characters, but something much more psychologically complicated.”

The Double’s environments are cramped, intense evocations of Simon’s inner reality, rather than the elaborate stuff of the sci-fi spectacular; but the film’s physical world was nonetheless a challenge to construct. “To not locate things geographically or temporally,” Ayoade says, “is infuriatingly difficult. We spent five months just on the sound. For most films, it’s a simple process of recording things with fidelity to the realistic. For this, it was the opposite: everything had to happen in a not-real space.”

Ayoade’s air of mild bafflement about what he’s made extends to the willing participation of his varied and eminent supporting cast, the international mix includes British veteran James Fox, and Hollywood stars Cathy Moriarty and Wallace Shawn. “It seemed unbelievable they might do it,” Ayoade marvels. “I don’t really understand it myself. London is attractive to Americans…” Submarine provided Ayoade with almost a complete set of returning case members – Yasmin Paige, Noah Taylor have substantial roles in The Double, while Craig Roberts, Sally Hawkins and Paddy Considine all appear in cameos – but, he claims, not much ballast.