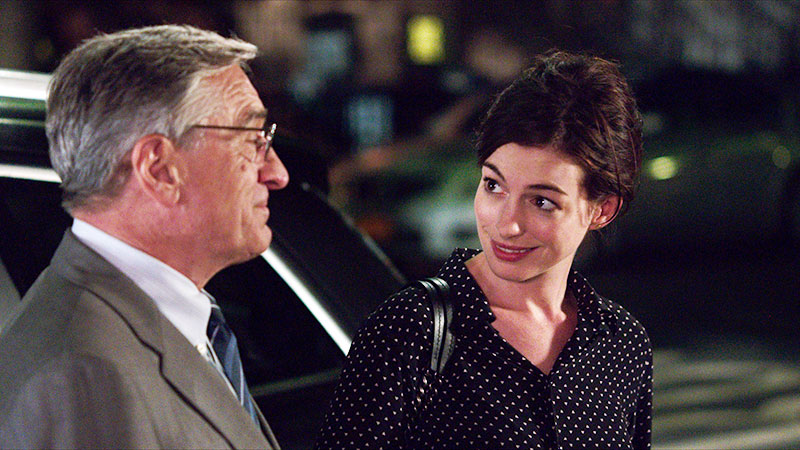 In “The Intern,” Robert De Niro stars as Ben Whittaker, a 70-year-old widower who has discovered that retirement isn’t all it’s cracked up to be. Seizing an opportunity to get back in the game, he becomes a senior intern at an online fashion site, founded and run by Jules Ostin (Anne Hathaway). 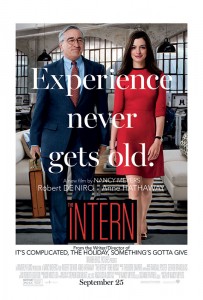 Costume designer Jaqueline Demeterio was introduced to the director by Nancy Meyers’ daughter, a PR executive at Chanel.

Writer/Director Nancy Meyers offers, “Relationships are what drive my films, but there are other kinds of relationships other than romantic ones. So when I had this idea about an older man becoming an intern at a start-up, I realized it wouldn’t be a love story, in the traditional sense; it would be a story about a bond and friendship…between two people who might otherwise never cross paths.”

Meyers considered having De Niro in the role of Ben to be something of a casting coup, stating, “Bob’s a brilliant actor with tremendous depth and range. In his other comedies, he’s often played a humorous version of the tough guy, but in ‘The Intern,’ we get to see a different side of Bob.”

Robert De Niro plays the man who gets the chance to begin again at a local Brooklyn start-up. The legendary actor says he appreciated the opportunity to collaborate for the first time with Meyers. Anne Hathaway stars opposite De Niro as Jules Ostin, the founder of an e-commerce site, About the Fit (ATF). Hathaway says, “Nancy is a wonderful, heartfelt filmmaker and, on a personal level, probably the funniest woman I’ve ever met.”

Producer Suzanne Farwell, whose collaboration with Meyers dates back to her working as an assistant on Meyers’ 1998 directorial debut, “The Parent Trap,” adds, “Nancy’s movies are timeless.”

Filming on “The Intern” took place in practical locations in Manhattan, Brooklyn and the Bronx, with some shooting on a soundstage in Yonkers. Meyers had a unique way of communicating with her entire team, including the actors, on all aspects of the production: Pinterest. “I love Pinterest,” says the director. “Before Pinterest it would be me talking everybody’s head off. Okay, I still talk their heads off.” Meyers thought doing a Pinterest board for each character and all the main sets would be a great way to show specifically what she was thinking.

Production designer Kristi Zea comments, “It’s a credit to Nancy’s energy level that she can troll through thousands of websites and pictures and post exactly what she wants, so accurately, that we were able to look at it and say, ‘I get it.’”

The film’s main set piece is the headquarters of About The Fit, which is located in the Red Hook part of Brooklyn. After scouting in Brooklyn, the filmmakers found the perfect space in the Bronx at The Light Box, a photo studio on the second floor of the Bank Note Building, a large complex which, until the seventies, manufactured over half of the world’s paper currency. Meyers loved the original, expansive windows, aged brick and all the natural light, of which director of photography Stephen Goldblatt took great advantage.

Other practical locations in Brooklyn were used for an ATF warehouse, two coffee shops and a market; Paige’s school in Park Slope; Cobble Hill Park, where Ben and Paige attend a birthday party; and Prospect Park, where Ben takes a Tai Chi class.