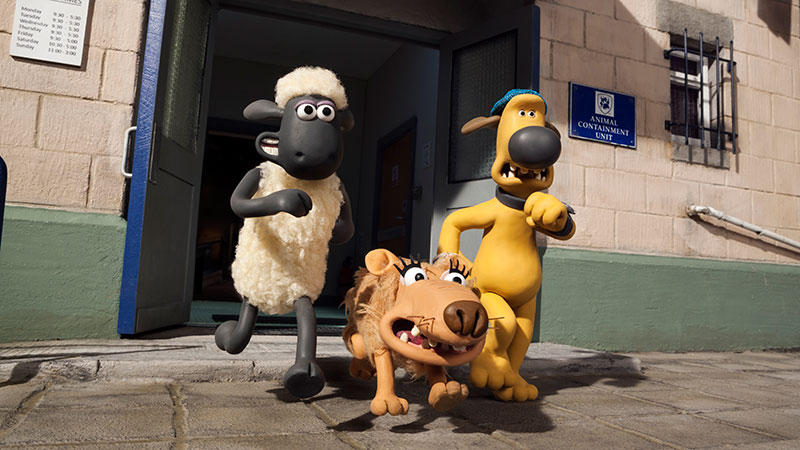 When Shaun decides to take the day off and have some fun, he gets a little more action than he bargained for. A mix up with The Farmer, a caravan, and a very steep hill lead them all to the Big City and it’s up to Shaun and the flock to return everyone safely to the green grass of home. 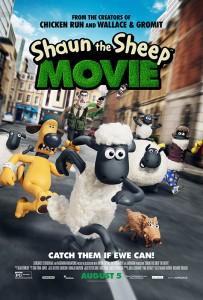 Working from nearly 80,000 storyboards, crews in 33 units used 58 cameras to shoot the movie. The film’s most ambitious sequence, set in the town plaza, required 42 puppets.

Shaun the Sheep made his debut in 1995 as a supporting player in Nick Park’s Oscar®-winning “Wallace & Gromit” short film A Close Shave. After a lengthy vacation, the four-legged charmer became an international television sensation starring in his own, completely dialogue-free TV show. A few years after Aardman launched the “Shaun the Sheep” series in 2007, the U.K.-based stop-motion animation house decided it was time to let the flock run wild on the big screen. But that prompted a big creative question: How would they take a character accustomed to seven-minute episodes and adapt his adventures for a feature-length journey—without a single word of dialogue? “The conventional solution would have been a voice-over,” says Aardman co-founder Peter Lord. “It was a bold choice to go with no speaking whatsoever.”

Shaun the Sheep Movie co-writer/co-director Mark Burton, who first worked with Aardman as a writer on the hit feature Chicken Run and returned to British filmmaking after a stint in Hollywood, embraced the silent-movie concept.  To prepare the animators for telling Shaun’s story without dialogue, the directors put together a crash course in silent movies. “We watched a lot of silent comedies and we weren’t above stealing a few gags,” Burton recalls, “We watched the films of the great French comedian Jacques Tati, who used sound as a way of telling a story.”

Co-writer/co-director Richard (“Golly”) Starzak had some specific ideas about how to expand Shaun’s appeal when he initially came on board to write and direct “Shaun the Sheep” television episodes. “I talked to Nick Park about the idea of ‘aging up’ Shaun so he would appeal to 10-year-olds, says Starzak. “Nick did a couple of drawings making Shaun look a bit older.”

Aardman employed 20 animators and 30 model makers to create Shaun the Sheep Movie. “Each animator tried to get three seconds of footage done every day, which for us is quite a lot,” explains lead animator Will Becher. The filmmakers typically produced 40 to 50 shots—which translates into about two and-a-half minutes of running time—per week. Working out of Aardman headquarters in Bristol, England, animators brought a variety of specialties to the table, ranging from comedy and action to drama.

Aardman has forged strong partnerships with Hollywood studios on its previous projects. But for Shaun the Sheep Movie, the British animators turned to French-based production and distribution company Studiocanal. Studiocanal encouraged Aardman filmmakers to focus purely on their comic instincts.