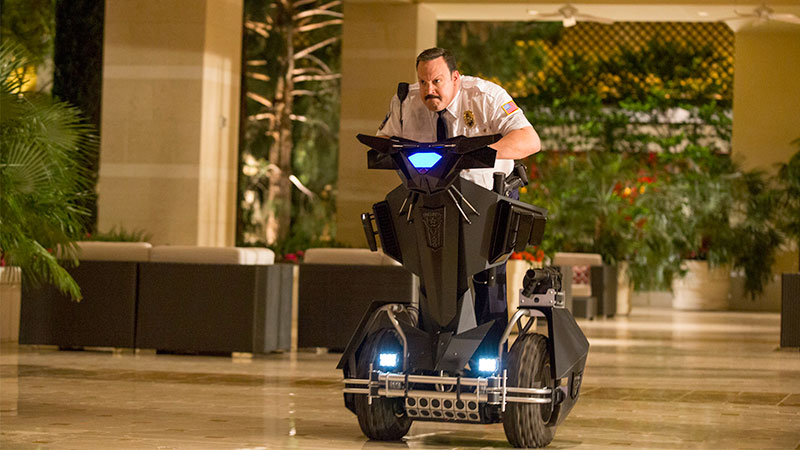 After six years of keeping our malls safe, Paul Blart has earned a well-deserved vacation. He heads to Vegas with his teenage daughter before she heads off to college. But safety never takes a holiday and when duty calls, Blart answers. 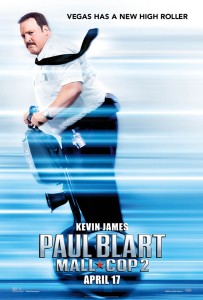 The film took full advantage of the locations in the resort, showcasing the beautiful main entrances, esplanades, casinos, breathtaking pools, award-winning restaurants and spas, Surrender and Encore Beach Club (two of their extremely popular clubs), the gorgeous suites, and even The Lake of Dreams with its 40-foot waterfall.

After the first film took in $183 million worldwide in 2009, Paul Blart is back. Kevin James, the funnyman who brought the character to life says that the reason the character struck a chord was that even though Blart has his less-than-stellar moments – and don’t we all?

Taking the helm of the sequel is  award-winning director, writer and producer Andy Fickman. Returning to join Kevin James are his co-stars: Raini Rodriguez, who plays Blart’s daughter, Maya, and Shirley Knight, who plays his mother. The original Paul Blart: Mall Cop was Rodriguez’s first feature film and first big project as an actor. Neal McDonough takes on the role of Vincent Sofel, the mastermind who threatens the hotel. It’s a rare comedic role for the actor.

The main cast at the hotel is rounded out by Daniella Alonso as Divina Martinez, the hotel’s general manager, and Eduardo Verástegui as Eduardo Furtillo, the hotel’s seemingly very capable head of security.

While on vacation, Blart discovers a threat to the world-famous Wynn and Encore Las Vegas, the two adjacent luxury resorts located on the Las Vegas Strip. The film was shot almost entirely on location at the resort – the first motion picture to shoot there. “It was truly a remarkable experience,” says Fickman. “You’re in one of the most famous cities in the world, living and filming at one of the most spectacular casino resorts. Every day, we were living the neon dream.”

The needs of the production and the goals of the location coincided perfectly, making the resort a natural choice. The Wynn Las Vegas, which was most recently named one of the top 100 hotels in the world according to Condé Nast Traveler, boasts a multitude of stunning environments never before seen on the big screen. Even Steve Wynn himself, along with his wife, Andrea, got into the act.

Although it was incredible experience to shoot at the hotel, which gave the movie a never-before-seen and gorgeous verisimilitude, the production faced a huge challenge: how to shoot a full-scale feature film in a working hotel – one with a very exclusive clientele? “The biggest challenge while filming at the Wynn/Encore resort was that it never stopped doing its main business,” says Fickman. “We were constantly working around life inside one of the most popular destinations in Vegas—24 hours a day, 7 days a week. It didn’t matter what time you were filming, the place was packed.”

For the film’s climax, Blart stages a daring rescue on the rooftops of the resort, ziplining between the towers, from the Encore tower to the Wynn tower. Of course, this was all achieved through movie magic; for the production, both rooftops were created on the roof of the Encore, with a false platform providing a point from which the filmmakers could shoot Blart’s zipline journey.