Grease is a 1978  musical film directed by Randal Kleiser and based on Warren Casey’s and Jim Jacobs’s musical, of the same name about two lovers in a 1959 high school. The film stars John Travolta, Olivia Newton-John, Stockard Channing, and Jeff Conaway. 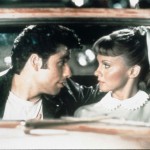 Grease was originally released to theaters on June 16, 1978. It was released in the US on VHS during the 1980s; the latest VHS release was June 23, 1998 as 20th Anniversary Edition following a theatrical re-release that March. On September 24, 2002, it was released on DVD for the first time.

It was successful both critically and at the box office. The soundtrack album became one of the best-selling in pop movie history, and provided several chart hits for the original artists and others.

Grease received generally favorable reviews and is considered by many as one of the best films of 1978. It currently holds an 83% “Certified Fresh” rating on the review aggregate website Rotten Tomatoes with a consensus that reads “Grease is a pleasing, energetic musical with infectiously catchy songs and an ode to young love that never gets old”. It holds a score of 70/100 on a similar website Metacritic.

Although Travolta was already famous from Saturday Night Fever and Welcome Back Kotter, Grease reaffirmed his status as a superstar. Newton-John’s fame also reached new heights after the movie released.

The movie’s soundtrack was a number one album in many different countries. The song “You’re The One That I Want” was released as a single prior to the film’s release and became an immediate chart-topper, despite not being in the stage show or having been seen in the film at that time.

In the United Kingdom, the two Travolta–Newton-John duets, “You’re the One That I Want” and “Summer Nights”, were both number one hits and appear 6th and 21st respectively in the official all-time UK best-selling singles list issued in 2002. The song “Hopelessly Devoted to You” was nominated for an Academy Award (1979) for Best Music – Original Song. The movie’s title song was also a number-one smash hit single for Frankie Valli.