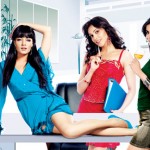 Hello Darling is a Bollywood comedy film produced by Ashok Ghai and directed by Manoj Tiwari, starring Gul Panag, Isha Koppikar and Celina Jaitley in the lead roles. The film is set to release on 27 August 2010 under the Mukta Arts Films banner. The film is a remake of the Tamil film, Magalir Mattum (1994) produced by Kamal Hassan.

When the lusty boss (Javed Jaffrey) of three fashion designers (Gul Panaag, Isha Koppikar and Celina Jaitley) targets them it leads to laugh riot in which all three are made to do his bidding. They must unite and figure out how to regain control of the situation and free themselves of this man and his agendas.